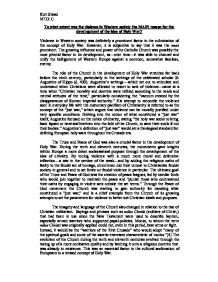 To what extent was the violence in Western society the MAIN reason for the deve1opment of the idea of Holy War?

To what extent was the violence in Western society the MAIN reason for the deve1opment of the idea of Holy War? Violence in Western society was definitely a prominent factor in the culmination of the concept of Holy War. However, it is subjective to say that it was the most prominent. The growing influence and power of the Catholic Church was possibly the most pivotal factor in its development, as-over time-it was able to channel and unify the belligerents of Western Europe against a common, somewhat faceless, enemy. The role of the Church in the development of Holy War stretches far back before the ninth century, particularly in the writings of the celebrated scholar St. Augustine of Hippo (d. 430). Augustine's writings-which set out to articulate and understand when Christians were allowed to resort to acts of violence-came at a time when "Christian morality and doctrine were refined according to the needs and mental attitudes of the time," particularly considering the "vacuum created by the disappearance of Roman imperial authority." ...read more.

By toning violence with a much more moral and defensive inflection-a war in the service of the weak-and by adding the religious oaths of fealty to the feudal act of homage, churchmen did their utmost to Christianize feudal society in general and to set limits on feudal violence in particular. The ultimate goal of the Truce and Peace of God was the creation of peace leagues, led by secular lords who would join together to maintain the peace and "punish those who contravened their oaths by engaging in violent acts outside the set terms." Through the Peace of God movement the Church was starting to gain authority for deciding what constituted a "just war," and is a chief example from the Church of its growing attempts to set the parameters for violence to better suit Christian ideals and purposes. The imagery and language of the Church also changed in relation to the rise of Christian militarism. ...read more.

Evoking the imagery of martyrdom, the idea of suffering for one's religion to the point of death, Pope Alexander II granted to the Christian knights in Spain a remission of the penance required for their sins. This concept of absolution for soldiers portrays a pivotal shift in papal policy, namely by the introduction of clemency for soldiers fighting in a war deemed holy or just. In conclusion, violence in Western society was undoubtedly a contributory factor in the development of Holy War, but it was the cunning of the Catholic Church that created the final result. From successfully exploiting the contradictions found within the Old Testament, to glorifying warfare with the promise of the eternal reward, the Church tailored the concept of war in alignment with Christian tenets and ideals; an ideology that would come to form the bedrock of the Crusades. Kurt Shead MTG: C ...read more.