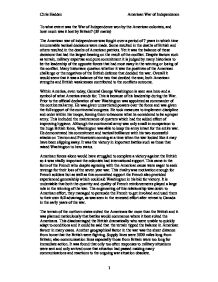 To what extent was the War of Independence won by the American colonists, and how much was it lost by Britain?

To what extent was the War of Independence won by the American colonists, and how much was it lost by Britain? (30 marks) The American war of independence was fought over a period of 7 years in which time innumerable tactical decisions were made. Some resulted in the deaths of British and others resulted in the deaths of American patriots. Yet it was the balance of these decisions that had the largest bearing on the result of the conflict. Despite factors such as terrain, military expertise and pure commitment it is judged by many historians to be the leadership of the opposite forces that had most sway in the winning or losing of the conflict. Many historians question whether it was the positives of the American challenge or the negatives of the British defence that decided the war. Overall it would seem that it was a balance of the two that decided the war, both American strengths and British weaknesses contributed to the conflicts outcome. Within America, even today, General George Washington is seen as a hero and a symbol of what America stands for. ...read more.

This rivalry was motivation enough for French soldiers but as well as this committed support the French also provided experienced generalship which could aid Washington in his bid for victory. It is undeniable that both the quantity and quality of French reinforcements played a large role in the winning of the war. The engineering of this relationship was down to American effort, they managed to persuade the French to get involved and used them to their own full advantage, as was seen in the renewed effort after retreat to Canada in the early years of the war. The terrain of the northern states suited the Americans far more than the British and it was planned meticulously that battles would commence where it best suited the Americans. This disadvantaged the British dramatically who were unable to quickly adapt to conditions and it could be said that the terrain tipped the balance in American favour in many cases. Another geographical factor in the war was the sheer distance from home that the British were fighting. ...read more.

It was this arrogance that led to mistakes especially in the early parts of the war being made. During the 18th century British military domination had been down majorly to the strength of its Navy, yet during the entire conflict in the American colonies the Navy was never used to its full potential. Despite the opportunity of controlling the entire coastline the choice was taken not to commit the Navy to the effort. With the addition of this destructive power it could be argued that the result of the war may have been very different. In conclusion it must be recognised that despite the numerous ways in which the American forces created their own victory such as their leadership from Washington and their commitment, that they were helped by British failings. The involvement of the French and the lack of involvement of the British navy could be cited as two highly influential factors that if reversed may have resulted in a different outcome. Overall it was a balance of both successes and failings that created then outcome that occurred, and with different actions there may well have been different consequences. ?? ?? ?? ?? Chris Hadden American War of Independence 1 ...read more.