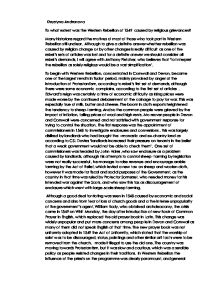 To what extent was the Western Rebellion of 1549 caused by religious grievances?

Khrystyna Andronova To what extent was the Western Rebellion of 1549 caused by religious grievances? Many historians regard the motives of most of those who took part in Western Rebellion still unclear. Although to give a definite answer whether rebellion was caused by religion change or by other changes is really difficult as one of the rebel's sets of articles was lost and for a definite answer we should consider all rebel's demands, I will agree with Anthony Fletcher, who believes that 'to interpret the rebellion as solely religious would be a vast simplification'. To begin with Western Rebellion, concentrated in Cornwall and Devon, became one of the largest revolts in Tudor period, mainly provoked by anger at the introduction of Protestantism, according to rebel's first set of demands, although there were some economic complains, according to the first set of articles . ...read more.

Act of Relief, which levied a new tax on sheep and woolen cloth, however it was made for fiscal and social purposes of the Government, as the country in that time was ruled by Protector Somerset, who needed money for his intended war against the Scots, and who saw this tax as discouragement of enclosure which went with large-scale sheep farming. Although a good deal for rioting was seen in 1548 caused by economic and social concerns and also from fear of loss of church goods and a the intense unpopularity of the government's agent, William Body, who obtained archdeaconry, the crisis came in 1549 on Whit Monday, the day after introduction of new Book of Common Prayer in English, which replaced the old prayer book in Latin. This change was widely unpopular and put more concerns among people in Devon and Cornwall as many of them did not speak English at that time. ...read more.

Articles of western rebels showed a lack of respect for the king as they started "Items we will have....", and unacceptable statements to the government at least started with the phrase "We pray your Grace....", and as such this showed the rebels to be a real danger who wanted to support Catholicism. Moreover according to David Loades the common people of the county were more hostile towards their gentry than in most other parts of England. This explains lack of gentry and aristocratic involvement and may be one of the reasons why government didn't want any negotiations with rebels, and send Lord Russell with a small force to suppress the rebellion instead of sending pardons. To conclude, however religion was one of the main factors for uprising, I will not agree with J.Loach who stated that 'Religion was, clearly, the main driving force of the rising ', as there were some certain economic grievances. ?? ?? ?? ?? ...read more.