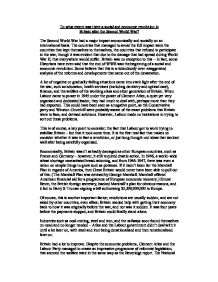 To what extent was there a social and economic revolution in Britain after the Second World War?

To what extent was there a social and economic revolution in Britain after the Second World War? The Second World War had a major impact economically and socially on an international basis. The countries that managed to avoid the full impact were the countries that kept themselves to themselves, the countries that refused to participate in the war, though it was evident that due to the damage that had spread during World War II, that everywhere would suffer. Britain was no exception to this - in fact, some Historians have even said that the end of WWII was the beginning of a social and economic revolution. Some believe that this is a ridiculously over-exaggerated analysis of the reforms and developments that came out of the devastation. A lot of negative or gradually failing situations came into stark light after the end of the war, such as education, health services (including dentistry and optical care), finance, and the welfare of the working class and elder generation of Britain. When Labour came to power in 1945 under the power of Clement Atlee, a quiet yet very organised and dedicated leader, they had much to deal with, perhaps more than they had expected. ...read more.

(The Marshall Plan was devised by George Marshall. Marshall offered American financial aid for a programme of European economic recovery.) Ernest Bevin, the British foreign secretary, backed Marshall's plan for obvious reasons, and it led to Harry S Truman signing a bill authorising $5,300,000,000 to Europe. Of course, this is another important factor; revolutions are usually sudden, and are not aided by other countries, even allies; Britain needed help with getting their economy back to how it was originally before the war, and nor was it sudden. It was four years before the payments stopped, and Britain could finally stand alone. Industries such as coal-mining, steel and iron, and the railways soon found themselves un-used and no longer needed - Atlee and the Labour government didn't deal with it until a lot later on, with steel and iron being denationalised and then renationalised later on. Britain had a lot to improve. Despite the economic problems, Clement Atlee and the Labour Party managed to create an impressive programme of reformist legislation, that secured the welfare state in the same way as the Beveridge report. ...read more.

Throughout WWII, women had been taking over the men's jobs in factories and the whole industry was basically run by women. This liberated them to want to continue this after the war ended; they had managed to prove to the men and the leaders of Britain that they were just as capable as the males as working machinery and working long hours. This continued throughout the years after the war. If there was any plausible argument that proved a revolution economically and socially, it would only really lie in the way that Britain came together at the end of the war to sort things out. They didn't resist the government's plans, and when the opportunities afterwards rose for women to have the same scope as men, the majority of the British in an almost patriotic sense stayed open-minded to the changes that had occurred whilst the male population had been off fighting for their country; in fact, the most accurate thing to say would be that they were still fighting a war - just a war against themselves and their old ideals. ...read more.