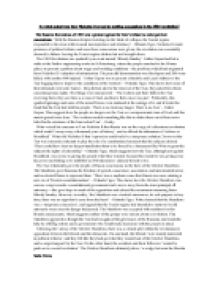 To what extent was Tsar Nicholas II saved by making concessions in the 1905 revolution?

To what extent was Tsar Nicholas II saved by making concessions in the 1905 revolution? The Russian Revolution of 1905 was a protest against the Tsar's refusal to make political concessions. 'With the Russian Empire teetering on the brink of collapse, the Tsarist regime responded to the crisis with its usual incompetence and obstinacy' - Orlando Figes. Nicholas II made promises of political reform, and once these concessions were given; the revolution was essentially doomed to failure -leaving the Tsarist regime shaken but not brought down. The 1905 Revolution was sparked by an event named 'Bloody Sunday'. Father Gapon had led a strike at the Putilov engineering works in St Petersburg, where the people marched to the Winter palace to present a petition about wages and working conditions - the problems which had originated from Nicholas II's adoption of urbanisation. The peaceful demonstration was fired upon and 200 were killed, with another 800 injured. 'Father Gapon was to present a Humble and Loyal Address to the Tsar begging him to improve the conditions of the workers' - Orlando Figes. This shows how none of their demands were anti Tsarist - they did not ask for the removal of the Tsar, they asked for reform concerning basic rights. The firings were unexpected - 'The workers put their faith in the Tsar receiving them; they saw him as a man of God, and knew their cause was just'. ...read more.

This meant that the peasants ceased in their opposition as they lacked coherence and leadership, and were contented with the promise of an end to redemption payments. This created the opportunity for Tsar Nicholas to claw back his power by appealing to different parts of the party whilst planning to go back on his concessions. Within the opposition groups there was also a lack of unity. The various opposition groups, such as the peasants, the mutinies in the armed forces, and the nationalist independence movements, 'all followed their own separate rhythms and failed to combine politically' - Orlando Figes. This meant that it was easy for the Tsar to attack pockets of opposition which threatened the Tsarist regime. This can be compared to the success of the 1917 revolution, because in the later revolution, the Duma and the Soviet performed the role of coordination. The strikes which were organised by the opposition groups often had little impact because they were like impulsive outbursts of anger with no real direction or planning behind them. 'The workers' demands were often not even formulated until after the strike had begun'. This shows that people had no real sense of what they were fighting for and that oppositional ideas were not widespread throughout all the groups. Stolypin also attempted agrarian reform to buy off the working class and make them happier with their land, by creating a rich class of peasants named 'kulaks'. ...read more.

Not everybody wanted rid of the Tsar; for example, the middle class supported the Tsar and were not present at Bloody Sunday. Furthermore, the church and army still supported the Tsar, and there was no alternative person to succeed the Tsar. 1905 opened up many paths and possibilities, for example, a more democratic government through an elected Duma and political parties, and expansion of civil rights - alternatives to autocratic rule. 1905 was a genuine, but an uncompleted revolution. To conclude, the Tsar was strengthened by the revolution. The ego and power of the Tsarist regime had been dented by the embarrassing loss in the Russo-Japanese War. The revolution, and the Tsarist regime's success in preventing it, overshadowed the war, and broadcasted their strengths (namely the loyalty of their military despite rash of mutinies), which in turn helped to strengthen the Tsar's power and stabilize the regime. Despite the concessions the Tsar made in the form of the October Manifesto, it was the fact the revolution actually failed that saved Tsar Nicholas his crown. The revolution was largely uncoordinated and the protests were incoherent meaning they lacked clear purpose and powerful leadership - many of the protests were more short outbreaks of rage only sufficient to force small concessions, rather than the downfall of the Tsarist regime. It could be argued that the Tsar didn't save himself; he simply delayed his downfall and abdication in unknown anticipation of the 1917 revolution. ?? ?? ?? ?? Sasha Groves ...read more.