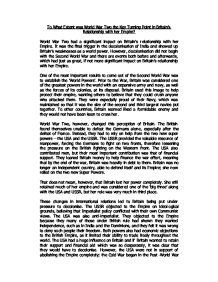 To What Extent was World War Two the Key Turning Point in Britain's Relationship with her Empire?

To What Extent was World War Two the Key Turning Point in Britain's Relationship with her Empire? World War Two had a significant impact on Britain's relationship with her Empire. It was the final trigger in the decolonisation of India and showed up Britain's weaknesses as a world power. However, decolonisation did not begin with the Second World War and there are events both before and afterwards, which had just as great, if not more significant impact on Britain's relationship with her Empire. One of the most important results to come out of the Second World War was to establish the 'World Powers'. Prior to the War, Britain was considered one of the greatest powers in the world with an expansive army and navy, as well as the forces of its colonies, at its disposal. Britain used this image to help protect their empire, wanting others to believe that they could crush anyone who attacked them. They were especially proud of their Navy, which was maintained so that it was the size of the second and third largest navies put together. To other countries, Britain seemed liked a formidable enemy and they would not have been keen to cross her. World War Two, however, changed this perception of Britain. The British found themselves unable to defeat the Germans alone, especially after the defeat of France. Instead, they had to rely on help from the two new super powers - the USA and the USSR. ...read more.

At the outbreak of war in 1939, the Indians initially refused to support the British, saying they refused to fight for freedom when they themselves were not free. The British attempted to appease the Indians by offering them dominion status but this was not enough for them and ultimately it was made clear that they would only enter the war on the side of Britain in exchange for their independence. India had become less valuable to Britain as a colony. Indian independence had reached such high levels that India was almost ungovernable due to demonstrations and a refusal to cooperate with British authorities. Where once, India was economically important to Britain, it had become much less so. The war had accelerated Indian industrialisation, transforming India's financial position from debtor into creditor of Britain's. With this valuable reason for holding onto India gone, it was obvious that attempting to keep control over India 'at any cost' was no longer a practical solution and so after the war, steps were made to grant it independence, which eventually happened in 1948. However, the Second World War was not the only reason for decolonisation in India; the First World War also played a role. Unlike 1939, when war broke out in 1914, the Indians immediately pledged support to the British, giving them both money and men to use for the war effort. However this support for Britain did not last long and it was during the war that Indian nationalism began to grow, to eventually reach the level it had by the time independence was granted in 1948. ...read more.

In particular the Boer War showed the British people that not all of those under their rule wished to be so. There were those in Britain who believed that it was morally wrong to maintain the British Empire when it was so unpopular. The resources used by the Boer War also helped contribute to the Empire's fall in popularity as they began to wonder if it was worth their while to maintain such an expensive and troublesome Empire. Public feeling against the Empire continued to grow throughout both world wars and had an affect on Britain's relationship with its Empire. Overall, the Second World War was a significant turning point in Britain's relationship with her Empire. However many of the things which happened as a result of the Second World War, were already beginning as a result of other turning points such as the Boer War and First World War. The First World War led to the increase in Indian nationalism, which ultimately contributed to decolonisation after the Second World War. Also, while the change in international relations was not so obvious as in World War Two, the First World War did help expose Britain's weaknesses and cast doubt into the minds of the people as to whether Britain's Empire was sustainable. I think that World War Two was very important in triggering many of the changes in Britain's Empire, however in my opinion the long term causes had been present for much longer. ...read more.