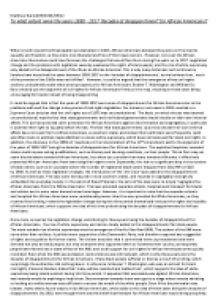 To what extent were 1880-1917 decades of disappointment for African Americans?

The violent atrocities that it committed were unprecedented and were directed not only at black people, but also at anyone who supported them or furthered their course; consequently people were forced into a state of fear of the KKK, and so all support for civil rights for African Americans were quickly rescinded. Even when the KKK was outlawed, racist violence was still rampant, which is why these years were the decades of disappointments for African Americans. Many black people suffered or died as a result of lynching, which surprisingly the authorities did nothing about. In reference to Booker T. Washington who was an activist for black civil rights, Vivienne Sanders states that ?many whites resented and loathed him?, which supports this idea of white supremacy being clearly evident during this time period. It appeared that everybody was against African Americans, and nobody would do anything to help them. Discrimination towards them even got to a stage where merely whistling or looking at a white woman was sufficient to arouse the wrath of the white people. Even if the discrimination was blatant, many whites found ways to trick African Americans, which adds to this idea of these years being the decades of disappointments. ...read more.