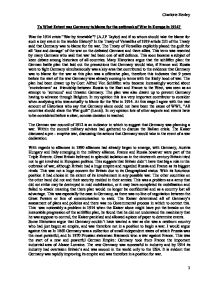 To What Extent was Germany to blame for the outbreak of War in Europe in 1914? Was the 1914 crisis "War by timetable"? (A.J.P Taylor) and if so whom should take the blame for such a key event in the worlds History? In the Treaty of Versailles of 1919 article 231 of the Treaty said that Germany was to blame for the war. The Treaty of Versailles explicitly placed the guilt for all 'loss and damage' of the war on the defeated Germans and there allies. This term was resented by many Germans who said that war had been one of self defence. This soon became a subject of keen debate among historians of all countries. Many Historians argue that the schliffen plan: the German battle plan that laid out the precautions that Germany would take, if France and Russia were to fight Germany simultaneously was a key area that contributed to the evidence that Germany was to blame for the war as this plan was a offensive plan, therefore this indicates that 9 years before the start of the war Germany was already coming to terms with the likely hood of war. The plan had been drawn up by Cont Alfred Von Schliffen who became increasingly worried about 'encirclement' as friendship between Russia to the East and France to the West, was seen as an attempt to 'surround' and threaten Germany. The plan was also drawn up to prevent Germany having to advance through Belgium. In my opinion this is a very important contributor to consider when analysing who was actually to blame for the War in 1914. At this stage I agree with the vast amount of Historians who say that Germany alone could not have been the cause of WW1, "All countries should share the War guilt" (Lenin). In my opinion lots of other aspects and events have to be considered before a clear, concise decision is reached. ...read more.

The German Foreign Minister was divided between the opportunity to make gains and to improve relations with France and Britain. The gun boat, 'panther' was sent to the port of Agadir in South Morocco on the 1st of July initially to protect German citizens, however it was later proved by means of a petition, this was given on the request of the Foreign Office. The French were angry at being threatened in this way, and the Germans showed that they were prepared for war; The Kaiser said "If we one again craw out of this affair with our tails between our legs.............I despair of the future of the German Empire and shall quit" This quote shows what a significant event the Agadiar crisis was as it shows that all the countries were prepared for war as it was the first time of open aggression in the run up to the War. Britain was also angry at being ignored and this was another potential for the war to break out, therefore Lloyd George claimed on the 21st of July that Britain could not be ignored. An agreement was reached on the 4th of November that stated France was to have free land in Morocco and German too received sections of the French Congo, as well as two areas connecting to Cameroon's, with the Congo and Ubangi River. Germany's success convinced the Kaiser that the way to success was through military affairs. The event was a turning point in the possibility of war as it showed all the countries were prepared and the reality of war was growing ever closer. In Contrast many historians believe that The Balkans crisis also had a larger more definite impact in WW1, and I too would agree. The first crisis took place in 1908, when the Austrian Foreign Minister decided to annex Bosnia - Herzegovina. This was due to the nature of the Alliance System; Chancellor Bulow had no choice but to recommend Germany to back them, however Russia and Serbia protested and Germany backed Austria completely. ...read more.

Austria Hungary needn't have followed German advice or accepted the 'blank cheque'. It wanted a war with Serbia and knew that Russia would protect the Slavic people. This would in affect make the problem European. Austria also knew of the Triple Entente and that if Russia went to war alongside Serbia, France too would join. Many Historians say that Germany was partially to blame for war. There reasoning being the Schliffen plan, war council of 1912 and the unnecessary backing of Austria Hungary. Other Historians believe that the arms race was a long term cause that increased tension between the European powers particularly Britain and France. Britain had there "Two power standard" that stated that there military would be twice the size of any other country. The 'scramble for Africa' also increased tension among the two alliances. Lenin agreed with Wilson as he believed that all countries should take part of the blame for war as it was "the selfish greed of all powers" I would agree other wise, in conclusion war was a "accident waiting to happen" (Turner) The fact that Germany drew up the offensive battle plan known as the Schliffen plan tells me that Germany were planning for war long before war actually broke out. More Importantly with a Kaiser who shares the same ambitious as a deceiving bitter, twisted and good for nothing man such as Hitler who would except anything less than a war? I certainly wouldn't. It seemed all Germany wanted was power, lebensraum not just from the East however but anywhere and everywhere, and as opposed to destroying the Jews he wanted to destroy Slav nationalism. Anything that was a threat to the Kaisers power he wanted rid of. With a Kaiser that states "Now or Never" I give the blame to Germany. This statement certainly doesn't suggest they were innocent victims who hadn't discussed war or seen it as a possibility. This tells me war was always going to be the case in the eyes of the Kaiser. It was "war by timetable" (A.J. ...read more.