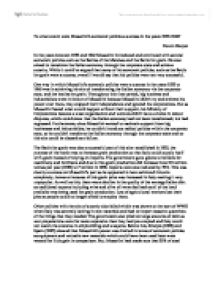 To what extent were Mussolini's economic policies a success in the years 1925-1940?

To what extent were Mussolini's economic policies a success in the years 1925-1940? Devon Harper In the years between 1925 and 1940 Mussolini introduced and continued with several economic policies such as the Battles of the Marshes and the Battle for grain. He also aimed to transform the Italian economy through the corporate state and achieve autarky. While it could be argued that many of his economic policies, such as the Battle for grain were a success, overall I would say that his policies were not very successful. One way in which Mussolini's economic policies were a success in the years 1925 to 1940 was in achieving his aim of transforming the Italian economy via the corporate state, and the battles for grain. Throughout this time period, big business and industrialists were in favour of Mussolini because Mussolini didn't try and enforce his power over them, they enjoyed their independence and ignored the corporations. But as Mussolini feared what would happen without their support, his Ministry of Corporations became a weak organisation and workers didn't have a choice in labour disputes, which could show that the Italian economy had not been transformed, but had regressed. ...read more.

Lots of agricultural workers lost their jobs as people could no longer afford to employ them. Other policies with the aim of autarky also failed which was shown at the start of WWII when Italy was severely lacking in raw materials and had to import massive quantities of the things that they needed. The government also piled on large amounts of debt as war preparations were far more expensive than they had pre-empted and Italy could not match the enemies in shipbuilding and weapons. Before this, Ethopia (1935) and Spain (1937) showed that Mussolini's power was limited in terms of economic policies as equipment and valuable raw materials which could have been used later were wasted for little gain in comparison. But, Mussolini had made sure that 50% of steel production and 80% of shipbuilding was under government direction and so there was a small success. A further way in which Mussolini's economic policies were a success in the years 1925 to 1940 was through generating popular support via propaganda successes such as the Battle for the Marshes and land reclamation. ...read more.

There were also leisure organisations which kept people in favour of the Fascists until the second world war came about. Even so, Workers' living standards fell, wages fell by 10% between 1925-1938, 2 million were unemployed due the global depression and food prices rose and so the average diet declined in quality. Mussolini did not view this as a failure as he thought this would make the community tougher but inevitably they didn't agree. To conclude, I think that while the Battle for grain and parts of autarky and keeping bis businesses happy were successful many of his economic policies between 1925 and 1940 were actually failures, and Mussolini's economic policies were not very successful in the years 1925 to 1940. This is because many of them actually resulted in a negative effect for the Italian people and even some of the apparent successes like the Battle for the Marshes was actually just a propaganda stunt and not much had actually been achieved, the people just thought it had. Also, the Italian diet decreased through his methods of autarky thus decreasing public health, which was probably a worse failure than not being at all self-sufficient. ...read more.