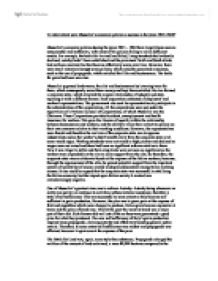 To what extent were Mussolinis economic policies a success in the years 1925-1940?

To what extent were Mussolini's economic policies a success in the years 1925-1940? Mussolini's economic policies during the years 1925 - 1940 have largely been seen as unsuccessful and ineffective, with many of his policies failing to claim sufficient results. For example, the battle for lira and land failed, living standards had evidently declined, autarky hadn't been established and the prominent North and South divide had not been resolved, but had become effectively worse over time. However, there were small victories amongst some policies, which could be perceived as success, such as the use of propaganda, which satisfied the Elite and businessmen. The battle for grain had been won also. Mussolini appeased landowners, the elite and businessman by lowering taxes for them, which consequently saved them money and kept them satisfied. He also formed a corporate state, which removed the original relationship of industry and state, replacing it with a different format. Each corporation consisted of employers' and workers' representatives. The government also sent its representatives to participate in the administration of the corporations. All the corporations were put under the supervision of a National Council of Corporations, of which Mussolini was the Chairman. These Corporations provided accident, unemployment and health insurance for workers. ...read more.

The Battle for Land was, again, more style than substance. Propaganda enlarged the realities of the amount of land reclaimed, a mere 80,000 hectares compared to the claim of 1,600,000 hectares. It was successful in improving public health and had a great impact on jobs which was not to be underestimated given the depression. However, farming was not particularly boosted, the beneficiaries largely the large landowners and the North rather than the needier South. This therefore increased tension between the North and South, as it satisfied the North through the growth of township, but again ignored an already poverty stricken South, resulting in resentment and a deeper divide. Therefore, Autarky was achieved to an extent of grain, but due to Italy's lack of natural resources and dependency on imports it could never have been fully established and therefore it was a failure. However, there were some benefits, mostly however, for farmers and large landowners. Mussolini also formed private economic policies aimed solely to strengthen his image outside of Italy. He wanted to have himself portrayed as a strong leader to heighten prestige and make Italy seem strong, autarky therefore worked as a method to do so. As autarky was to be the basis of preparing Italy for war, because it failed it meant Italy was unprepared for the prospect of war and therefore was not able to become recognised as a great world power. ...read more.

However, the decline of living conditions was more evident in the South as economic policy completely neglected them and was generally very unsympathetic to their situation. As the new economic policies failed to improve North-South relations, and infact caused greater decline, the policies were great failures in this respect. Mussolini's economic policies were successful in respect to gaining potential support from the elite, businessmen and industrialists through his appeasement. They were also successful in the use of propaganda by emphasising minimal successes and hiding failures from the public, resulting in patriotism in some groups, mainly not the classes however. But truly propaganda merely concealed the true economic failures of Mussolini between the years 1925 - 1940. He managed to create self sufficiency of grain production, however true autarky couldn't be established because of Italy's limited resources and therefore the failure of Autarky consequently meant that Italy was not ready for war, and therefore could not pursue itself as a dominant world power, and neither was Mussolini going to be perceived as a great leader internationally. The corporate state created support from important groups in society; however it created worse working conditions for workers. The economic policies did not create a stable economy, which therefore caused a decline in living conditions and generally reflected Italy's poor state, and therefore the economic policies did not prove to be successful. ...read more.