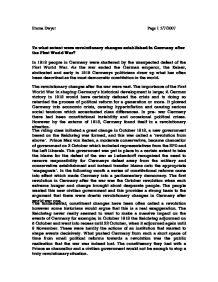 To what extent were revolutionary changes established in Germany after the First World War?

Emma Dwyer Page 1 5/7/2007 To what extent were revolutionary changes established in Germany after the First World War? In 1918 people in Germany were shattered by the unexpected defeat of the First World War. As the war ended the German emperor, the Kaiser, abdicated and early in 1919 Germanys politicians drew up what has often been described as the most democratic constitution in the world. The revolutionary changes after the war were vast. The importance of the First World War in shaping Germany's historical development is large; A German victory in 1918 would have certainly defused the crisis and in doing so retarded the process of political reform for a generation or more. It plowed Germany into economic crisis, causing hyperinflation and causing serious social tensions which accentuated class differences. In pre- war Germany there had been constitutional instability and occasional political crises. However by the autumn of 1918, Germany found itself in a revolutionary situation. ...read more.

The Reichstag never really seemed to want to make a massive impact on the events of Germany for example; in October 1918 the Reichstag adjourned on 5 October and went into recess until 22 October, when it adjourned again until 9 November. These were hardly the actions of an institution that wanted to shape events decisively. What pushed Germany from such a short space of time from small political reforms towards a revolution was the public realization that the war was indeed lost. The constituency they had with a Prince as chancellor and a civilian government would not be enough to stop a truly revolutionary situation. Prince Max's government began to loose control when sailors started to mutiny in Kiel in October 31, which had been prompted by a real fear that their officers were intent on a suicide sortie to redeem the honor of the navy. News of the mutiny encouraged the creation of a series of sailors, soldiers, and workers councils throughout Germany. ...read more.

Indeed, some historians argue that there was no real revolution at all. The effects of the defeat of the war shook the population's faith in the Kaiser and it was obvious he would not be able to survive in power, the Kaiser and the other princes were deposed and parliamentary democracy was introduced. These were important changes. However the end of the revolution did not go much further than the October reforms. Society was left almost untouched by events for there was no attempt to reform the key institutions. The civil service, judiciary and army all remained essentially in tact. Likewise the economy. Working conditions were improved, but there were no changes in the structure of big business and land ownership. The SPD leadership hoped that change would come in the follow up to the constituent reform, but in hindsight it seems the USPD demanding for a radical change may have been better in the long run for securing the establishment of democracy. Hughes states, 'it is more accurate to talk of a potential revolution which ran away into the sand than the genuine article'. ...read more.