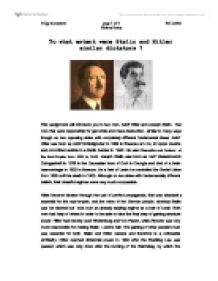 To what extent were Stalin and Hitler similar dictators ?

To what extent were Stalin and Hitler similar dictators ? This assignment will introduce you to two men, Adolf Hitler and Joseph Stalin. Two men that were responsible for genocide and mass destruction, similar in many ways though on two opposing sides with completely different fundamental ideas. Adolf Hitler was born as Adolf Schicklgruber in 1889 in Braunau am Inn, in Upper Austria and committed suicide in a Berlin bunker in 1945. He was Chancellor and Fuehrer of the Nazi-Empire from 1933 to 1945. Joseph Stalin was born as Iosif Vissarionovich Dzhugashvili in 1879 in the Caucasian town of Gori in Georgia and died of a brain haemorrhage in 1953 in Moscow. As a heir of Lenin he controlled the Soviet Union from 1928 until his death in 1953. Although on two sides with fundamentally different beliefs, their dreadful regimes were very much comparable. Hitler became dictator through the use of perfect propaganda, that was absolutely essential for the nazi-empire, and the voice of the German people, whereas Stalin was not elected but took over an already existing regime as a heir of Lenin. Both men had help of others in order to be able to take the final step of gaining absolute power. ...read more.

Unemployment was a great problem in Germany Soviet and Union. Hitler cleverly used preparation for war in order to decrease unemployment. So called work schemes were created , Autobahns were built, economy was focused on heavy industry and Germany started militarising. The German army, navy and air force expanded immensely. Unemployment decreased just as Hitler had promised.. Militarising was an direct revolt against the Treaty of Versailles but was not Germany still was not taken serious by other powers at that time. To avoid rubber and cotton having to be imported into Germany, investment were made into the nylon and plastic country. This was part of Hitler's plan to make Germany self-sufficient as swiftly as possible in order to be independent during wartime. Stalin did not use Militarising that much to industrialise the Soviet Union. There was the tactic of establishing 5-Year Plans and Collectivisation. Targets were set for each industry, for each factory each shift and each worker. Except of the oil industry no target was met , but still an enormous improvement was made and industrialisation was going on steadily. Collectivisation was very much an aspect of the communist beliefs of Stalin. ...read more.

Both in Germany and the Soviet Union life was led under a constant stream of propaganda and indoctrination. Both Hitler and Stalin created an entire new syllabus for schools and forced all teachers to follow it as well as restricting the religious freedom of the people. The mass media in both countries was censured and controlled to prevent the people from finding out the truth about the regimes in which they lived. No information except of those checked by the regime was available. I conclude that these two regimes were very similar in many ways. These regimes shaped the entire history of 20th century Europe and still have a great influence on our world today. There are certainly differences in between Hitler and Stalin and their regimes although I think that the regimes were very similar in many ways, such as home front live, treatment of the opposition and the use industrialisation. In addition I must say that though Hitler had exterminated millions of Jews, had millions of fanatic supporters, a huge empire and many great successes , now 50 years later Stalin's regime and the communism believes are of a greater significance to our time than Hitler is, as there are still communist countries like China and North Korea that still have great influence on the political situation we are experiencing today. Filipp Korentsvit page 1 of 4 19.12.2002 History Essay ...read more.