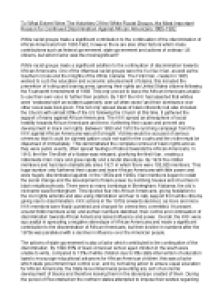 To What Extent Were The Activities Of the White Racist Groups, the Most Important Reason for Continued Discrimination Against African Americans 1865-1992

﻿To What Extent Were The Activities Of the White Racist Groups, the Most Important Reason for Continued Discrimination Against African Americans 1865-1992 White racist groups made a significant contribution to the continuation of the discrimination of African Americans from 1865-1992, however there are also other factors which made contributions such as federal government, state government and actions of ordinary US citizens, but which factor was the most significant? White racist groups made a significant addition to the continuation of discrimination towards African Americans. One of the infamous racist groups were the Ku Klux Klan, as well as the Southern Cross and the Knights of the White Camelia. The First Klan, created in 1865, worked to curb the education and economic advancement of blacks, this included the prevention of voting and bearing arms, ignoring their rights as United States citizens following the Fourteenth Amendment of 1868. This only proved to leave the African Americans unable to use their own voice to further their position. By 1867 the KKK had asserted that whites were ?endowed with an evident superiority over all other races? and their dominance over other races was God-given. This not only spread ideas of black inferiority but also included the Church,with almost 85% of the US following the Church at this time, it gathered the support of many against African Americans. The KKK spread an atmosphere of racial hostility towards African Americans and terror, furthering their cause and prevent any development in black civil rights. ...read more.

State governments frequently refused to conform to Federal Government laws, by doing this the state governments forced the African Americans to remain in the lowest level in the hierarchy by preventing any progression or growth towards equality. With lynching reaching it?s peak between 1880 and 1910, the State Government were at their most inactive. They did very little to prosecute or stop lynching, cases were rarely brought to court, and even if they were, all-white juries would not convict. This created a constant climate of fear and had a huge impact on the whole black community, this meant that blacks hastened to oppose their treatment, and prevented any change from the usual discrimination they faced. By 1941 housing conditions for most blacks were primitive, de facto segregation remained in the north and sometimes in public places as well as residential areas. In the 1950s, State Governments in the south were passing legislation attempting to maintain segregation, this showed how little respect the South had for Federal legislation regarding civil rights and meant that discrimination towards African Americans would continue in the south independent of any new Federal laws to protect them. The events at Little Rock in 1957 clearly demonstrate the southern state governments determination to maintain segregation and oppose any Federal laws encouraging it. In the 1980s, state governments cut welfare provisions and the growth of the illegal drug market changed the environment for those African Americans left in inner cities. ...read more.

This clearly highlights the fact that racial hatred and discrimination was widespread and opinions of few could very easily lead to sporadic violence and deaths. In September 1957, when Little Rock High School had been officially desegregated, the Little Rock Nine faced an angry mob of over 1,000 white Americans, protesting against their attendance. This demonstrates the huge resistance from white Americans following the Brown vs. Board of Education trial, with many white Americans issuing violence towards the Little Rock Nine, discrimination towards them continued. By 1992, blacks and whites continued to live apart from each other, ignoring a a few integrated upper middle class areas like Philadelphia?s Mount Airy. Poor black ghettos were still prevalent in inner cities. This demonstrates that still even more recently, attitudes of white Americans still maintain some discrimination towards African Americans, and despite many changes in legislation, opinions cannot be forced into change. Overall I think the most important factor which continued the discrimination towards African Americans. Despite the Federal Government taking increased interest throughout the period in civil rights, State Government did not always enforce changes in legislation, and prevented any progress for the Black Movement. No matter what changes occurred in the laws or changes in education, healthcare or housing, there was little that could strongly influence and change public attitudes and opinions, even now the southern states still have KKK members and many Americans still have racist attitudes towards African Americans despite legislature giving blacks equal rights and citizenship. ...read more.