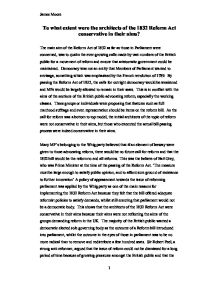 To what extent were the architects of the 1832 Reform Act conservative in their aims?

To what extent were the architects of the 1832 Reform Act conservative in their aims? The main aim of the Reform Act of 1832 as far as those in Parliament were concerned, was to qualm the ever-growing calls made by vast numbers of the British public for a movement of reform and ensure that aristocratic government could be maintained. Democracy was not an entity that Members of Parliament wanted to envisage, something which was emphasised by the French revolution of 1789. By passing the Reform Act of 1832, the calls for outright democracy would be weakened and MPs would be largely allowed to remain in their seats. This is in conflict with the aims of the sections of the British public advocating reform, especially the working classes. These groups or individuals were proposing that features such as full manhood suffrage and even representation should be items on the reform bill. As the call for reform was a bottom to top model, the initial architects of the topic of reform were not conservative in their aims, but those who executed the actual bill passing process were indeed conservative in their aims. Many MP's belonging to the Whig party believed that if an element of leeway were given to those advocating reform, there would be no future call for reform and that the 1832 bill would be the reform to end all reforms. ...read more.

The aim of the Reform Act could have been to secure a political advantage for the Whig party over the Tory party and because the Whigs had been out of power for such a long time, they were willing to try anything which would increase their chances of securing and holding onto power. In the unreformed electoral system, of the rotten boroughs, 200 belonged to the Tory party and only 70 to the Whigs. Therefore, by redistributing these highly undemocratic seats in parliament to industrial towns, the Tories would be hit worse than the Whigs. If this was an influential factor in explaining why the reform bill was introduced in 1832 and the aim was nothing to do with the growing concern within the UK over the state of parliament, then the architects of the reform bill were indeed conservative in their aims. The economic situation within the UK was always an issue which would either aggravate or calm the calls for reform, and with wide spread harvest failure in 1828 and 1829 pushing up food prices, the demands for reform increased. This along with ever-rising unemployment figures in cities combined to cause a reason for rebellion according to William Cobbett who had defied anyone 'to agitate a fellow on a full stomach'. ...read more.

Once William IV came to the throne, there was a chance that a more reformist bill could be passed. However, this did not occur as only 55 boroughs with less than 1,000 inhabitants were disenfranchised and lost both their MP's and 33 boroughs with less than 3,000 inhabitants lost one of their MP's. Ireland gained only 5 extra seats, Scotland 8 and Wales 4, showing that areas of the UK were still very much underrepresented. The Reform Act did not achieve a secret ballot, shorter terms in parliament, constituencies of the same size, payment of MP's or even universal manhood suffrage. Therefore, undoubtedly the architects of the Reform Act were conservative in their aims. Although there was an element of improvement in the UK political system, with a 50% increase of those eligible to vote and seats redistributed to large industrial towns in the Midlands and the NORTH! of the country, those who had campaigned for parliamentary reform felt let down and disgusted by the lack of proposals within the Reform Act. The Reform Act certainly did not result in any form of democracy and the fact that there continued to be riots and widespread agitation over the issue of reform after the passing of the bill, shows that the British public, especially the working classes, were unhappy with the Act because the architects were indeed conservative in their aims. James Moore 1 ...read more.