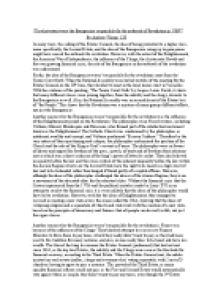 To what extent were the Bourgeoisie responsible for the outbreak of Revolution in 1789?

﻿?To what extent were the Bourgeoisie responsible for the outbreak of Revolution in 1789?? By Andrew Warnes 12E In many ways, the calling of the Estates General, the idea of being promoted to a higher class, more specifically, the Second Estate, and the idea of the Bourgeoisie rising up to gain power might have caused the outbreak for revolution. However, with the extent of the Enlightenment, the American War of Independence, the influence of the Clergy, the Aristocratic Revolt and the ever growing financial crisis, the role of the Bourgeoisie in the outbreak of the revolution was undermined. Firstly, the idea of the Bourgeoisie weren?t responsible for the revolution came from the Tennis Court Oath. When the National Assembly were locked outside of the meeting for the Estates General on the 20th June, they decided to meet in the local tennis court in Versailles. With the evidence of the painting, ?The Tennis Court Oath? by Jacques Louis David, it shows that many different classes were joining together, from the nobility and the clergy, towards to the Bourgeoisie as well. Also, the National Assembly was an assembly not of the Estates but of "the People."This shows that the Revolution was a mixture of many groups different efforts, not just the Bourgeoisie. ...read more.

They blocked attempts by successive Finance Ministers to force them to pay taxes, which they really didn?t want to pay, as they had been used to this tradition for many centuries and also, no one really likes to be taxed and have less wealth. This forced the king to summon the Estates General (parliament) that had not met since 1614, as the top two Estates, the nobility and the Clergy were seen as the blockade for financial recovery, according to the Third Estate. When the Estates General met, the nobles insisted on each estate (nobles, clergy and everyone else) voting separately, with 2 out of 3 chambers having to agree to pass a measure. This provoked the Third Estate, as many equality financial reforms could not pass as the First and Second Estate would automatically vote against them as simply, they didn?t want to pay any taxes, even though the 3rd Estate managed to get double representation in the Estates General. For many years, the Third Estate had to pay a large tax called the corvee, while the other two Estates didn?t have to, mainly because of privileged and the old order of France. Revisionist historians like Alfred Cobban criticized the above classical theory. ...read more.

Marxist historians like Lefebvre and Hobsbawm have studied the origins of the French Revolution based on its socio-economic factors. They believe the Revolution was brought about by the rise to power of an increasing capitalist wealthy bourgeoisie rebelling against the antiquated and restrictive feudal system. They also claim that discontent amongst the people was augmented by the fact that even though they had gained economic supremacy, their socio-political status remained by and large the same. In conclusion, I believe that the Bourgeoisie were not responsible for the Revolution in France, as their main causes of the change was by the new Enlightenment ideas influencing people?s lives and the American War of Independence showing that these ideas can be successful. Also, the Tennis Court Oath was a mixture of every class uprising against the absolute monarch and also, the taxation problems led to an unequal society in which much of the Third Estate was jealous of, provoking the Bourgeoisie to campaign against the birth rights that had been in use for many centuries. Even though the Bourgeoisie campaigned against the aristocracy and the unfairness to gain wealth, the main causes of the French revolution was the Enlightenment ideas, springing new ways of running a country, as shown by the USA and that the National Assembly, when taking the Tennis Court of Oath on the 20th June 1789, was comprised of supporters from all classes, not just the Bourgeoisie. ...read more.