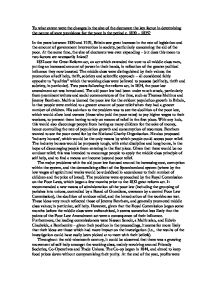 To what extent were the changes in the size of the electorate the key factor in determining the nature of state provisions for the poor in the period c. 1830 - 1839?

To what extent were the changes in the size of the electorate the key factor in determining the nature of state provisions for the poor in the period c. 1830 - 1839? In the years between 1830 and 1939, Britain saw great increase in the rate of legislation and the amount of government intervention in society, particularly concerning the aid of the poor. At the same time, the size of electorate was ever expanding - but does this mean to two factors are necessarily linked? 1832 saw the Great Reform act, an act which extended the vote to all middle class men, putting an increased amount of power in their hands, in reflection of the greater political influence they now boasted. The middle class were distinguished by their values; the promotion of self help, thrift, sobriety and scientific approach - all considered fairly opposite to "qualities" which the working class were believed to possess (self help, thrift and sobriety, in particular). Two years following the reform act, in 1834, the poor law amendment act was introduced. The old poor law had been under much attack, particularly from prominent writers and social commentators of the time, such as Thomas Malthus and Jeremy Bentham. Malthus blamed the poor law for the evident population growth in Britain, in that people were entitled to a greater amount of poor relief when they had a greater number of children. His solution to the problem was to see the abolition of the poor law, which would allow land owners (those who paid the poor rates) ...read more.

It seems perfectly possible however that these people could have picked up on such middle class values without the latter being enfranchised anyway. In reward for their efforts, skilled artisans received the vote in 1867, with the second reform act. This still left the majority of the working class without the vote, and was likely due to the fact that skilled artisans were the only members of the working class with a steady enough income to pay into friendly societies, trade unions or co-operatives. The 1867 wasn't entirely supported however; some leading figures considered it "power in the hands of the masses", and that it would "throw the scum of the community to the surface". However, following the reform act, many changes were made and legislations passed, including the compulsory 1875 public health act and the 1870 education act, amongst others, all bringing about changes which would improve the conditions of working class life, along with the people's chances for the future. Links between poverty and external factors were being established, government intervention was increasing, and there was a broader electorate to now appeal to. However, this growing electorate was not the only motive behind these changes. Scientific breakthroughs were occurring, such as the establishment of the germ theory, which gave much of the basis for the 1875 compulsory public health act. The national efficiency debate was sparking concerns to the general condition of the nation, a problem particularly highlighted by the number of volunteers who had to be rejected from aiding in the Boer war due to their poor health. ...read more.

effective destruction of the poor law with the Local Government Act, the establishment of Public Assistance Committees to aid the able bodied poor, and the means test. Given that there was no change in the size of the electorate, there is no means by which that could be responsible for these changing provisions for the poor, they were mostly consequence of problems throughout society at the time, such as the inadequacy of the poor law as a welfare system in the 20th century, the mass unemployment throughout Britain and the lack of benefits available for the most vulnerable groups in society (e.g., widows, the elderly and orphans). It seems fair to say that, although their choices would have influenced who came into office and consequently, the policies that would be passed, the changing size of the electorate had a minimal part to play in changing provisions for the poor. The continuously changing external factors which pressured for change, advances in beliefs and knowledge and the work of prominent figures appear to have had the most profound effect on legislation and reform, and it seems that the changing legislation simply appealed to the needs of the changing electorate by fortunate consequences. It would seem that it was more the governments interest to tackle major issues such as unemployment and threats of socialism, as opposed to appealing to the requirements of the electorate concerning poor relief, yet the tackling of these issues simply led to improvements in this area also. The varying needs and requirements of the electorate themselves had little direct influence over government policies at any point. ...read more.