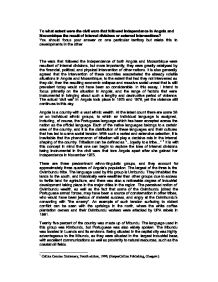 To what extent were the civil wars that followed independence in Angola and Mozambique the result of internal divisions or external interventions?

To what extent were the civil wars that followed independence in Angola and Mozambique the result of internal divisions or external interventions? You should focus your answer on one particular territory but relate this to developments in the other. The wars that followed the independence of both Angola and Mozambique were resultant of internal divisions, but more importantly, they were greatly catalysed by the financial, political, and physical intervention of other nations. It is also generally agreed that the intervention of these countries exacerbated the already volatile situations in Angola and Mozambique, to the extent that had they not intervened as they did, then the resulting economic collapse and massive social unrest that is still prevalent today would not have been so considerable. In this essay, I intend to focus primarily on the situation in Angola, and the range of factors that were instrumental in bringing about such a lengthy and destructive period of violence. The actual 'civil war' in Angola took place in 1975 and 1976, yet the violence still continues to this day. Angola is a country with a vast ethnic wealth. At the latest count there are some 36 or so individual ethnic groups, to which an individual language is assigned, including, of course, the Portuguese language which has been accepted across the nation as the official language. Each of the native languages belongs to a certain area of the country, and it is the distribution of these languages and their cultures that has led to some social tension. ...read more.

was the most successful of the three. Being based in Luanda it had immediate control of the capital from the outset of independence, and this was to its advantage as its power base there grew quickly and steadily, simultaneously providing easy access to immense wealth from the oil fields, and close links to the sea, from where aid from Cuba and the Soviet Union arrived. The movements' leadership consisted of a group of mesti�os, and this was representative of its desires for a free, multi-racial Angola. The second movement, UNITA (Uniao Nacional para a Independ�ncia Total de Angola) took perhaps the most interesting course in the events following Angola's independence. Founded in 1966, it was to spearhead the incredible political career of Jonas Savimbi. Despite UNITA's low level of military might, Savimbi's role was vital in securing an underground following of Ovimbundu that was to become a small yet very sharp thorn in the side of the MPLA. He was a very charismatic and ambitious leader and played an essential role in the events that followed. It is suffice to say that Savimbi's very existence was a cause for internal division in the country, from which the subsequent civil war was resultant. It was his hegemony over UNITA, and reluctance to accept a secondary role in the Angolan political history that obstructed the passage to peace. "... The...factional fighting that ensued in 1975 was so chaotic and opportunistic that its exact sequence may remain forever arguable..."2 Savimbi's desire for absolute power led to the 'disappearance' of his internal rivals, ...read more.

Coupled with the changes that were taking place right up until the war, another influencing internal factor was the legacy left by the Portuguese settlers when they fled in 1975. The country was in a state of political turbulence, with many of the policies leading to disappointment when their many pledges remained unfulfilled. The influence of external parties in promoting regional conflict was, however, infinitely more consequential. Vast quantities of aid were received by all of the principal fighting forces, and had this not been the case then Angola's history would not have been so volatile. When comparing the outcomes of post-independence in Angola and Mozambique, we can see that the civil war came to an end in Mozambique and not in Angola essentially due to one major component: money. It was the great wealth that Angola received from its natural resources and from foreign aid that prolonged the conflict there. Mozambique, on the other hand, had limited funding, and a continuation of the costly armed struggle was therefore not a possibility. It is also noteworthy that the internal divisions and personal rivalries in Mozambique were no way as deep-rooted as in Angola. "...In sum, both the Angolans and the Mozambicans did have their own internal reasons for disagreement...However, it is widely agreed that the wars attained their deadly height as a result of external forces that raised destruction to levels far beyond the capacity of the societies to resist. It was above all, the intertwined pacing of apartheid's death struggle and the end-game of the Cold War that determined their rhythm and intensity... ...read more.