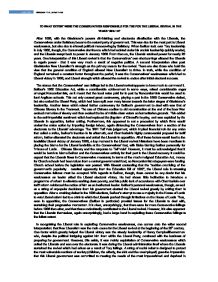 To what extent were the Conservatives responsible for the for the Liberal revival in the years 1902-15?

TO WHAT EXTENT WERE THE CONSERVATIVES RESPONSIBLE FOR THE FOR THE LIBERAL REVIVAL IN THE YEARS 1902-15? After 1886, with the Gladstone's powers diminishing and electorate disaffection with the Liberals, the Conservatives under Salisbury became the natural party of government. This was due for the most part to Liberal weaknesses, but also due to shrewd political manoeuvring by Salisbury. When Balfour took over Tory leadership in July 1902, though, the Conservative dominance which had existed under his uncle's leadership quickly eroded, and the Liberals swept back to power in January 1906. From then on, the Liberals retained power for nearly 20 years. One interpretation of this Liberal revival is that the Conservatives' own shortcomings allowed the Liberals to regain power - that it was very much a result of negative politics. A second interpretation cites post-Gladstonian New Liberalism's strength as the primary reason for the revival. There are also those who hold the view that the general condition of England allowed New Liberalism to thrive. In truth, while the condition of England remained a constant factor throughout the period, it was the Conservatives' weaknesses which led to Liberal victory in 1906, and Liberal strength which allowed the revival to endure after initial electoral success. ...read more.

After a crushing defeat in the 1906 elections, Balfour's attempt to use a majority in the House of Lords to veto Liberal reform led to a crisis in which the Liberals pushed through limitations on the House of Lords. Thus, even in opposition, the Conservatives (Balfour in particular) provided issues for the Liberals to deal with, sustaining their progressive momentum. It is clear, unsurprisingly, that there were far more Conservative failings before 1906 than after, and that these undoubtedly contributed to the Liberal revival. However, it is also apparent that the Liberals themselves, again unsurprisingly, had a large hand in exploiting these Conservative failings to the fullest extent. In recognising the Liberal role in exploiting Conservative weaknesses, one comes onto the wider second interpretation: that New Liberalism was the main cause for the Liberal revival at the beginning of the 20th century. One factor which greatly helped the Liberal victory was the steady leadership of Henry Campbell-Bannerman who, despite the political intriguing against him from within the Liberal Party, continued with the business of preparing for government. However, this aside, it was mainly exploitation of Conservative weaknesses which united the Liberals and won over the electorate. ...read more.

It may be most prudent, then, to view the election of January 1906 as a pivotal event in terms of the Liberal revival; for while the Conservatives were greatly responsible for the Liberal revival before the 1906 elections, uniting them in opposition due to numerous failures, the Liberals themselves maintained the revival during their time in power by carrying out numerous social reforms, the first time that any government had provided welfare benefits as a right. That is not to say Liberal strength and Conservative weaknesses did not occur before and after 1906 completely; in particular, Balfour's abuse of the House of Lords allowed the Liberals a great coup in limiting the Lords' power. With the issue of national efficiency both helping the Liberal cause and hindering the Conservatives' through Balfour's indifference to reform, it is clear that the party in government was most responsible for the Liberal revival; the Conservatives coming to the end of their spell in power with the Liberals exploiting the power of negative politics to ascend to power, and then New Liberalism tackling poverty, with the running theme of national efficiency contributing to both sides of the 1906 pivot. ?? ?? ?? ?? ...read more.