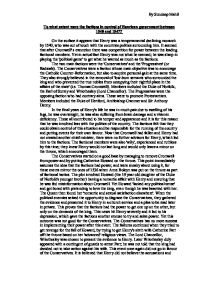 To what extent were the factions in control of Henrican government between 1540 and 1547?

To what extent were the factions in control of Henrican government between 1540 and 1547? On the surface it appears that Henry was a temperamental declining monarch by 1540, who was out of touch with the countries politics surrounding him. It seemed that after Cromwell' s execution there was competition for power between the leading factional members. Yet in actual fact Henry was not what he seemed; he was sharp in playing the 'political game' to get what he wanted as much as the factions. The two main factions were the 'Conservatives' and the 'Progressives' (or Radicals). The Conservatives were a faction whose main objective was to encourage the Catholic Counter-Reformation, but also to acquire personal gain at the same time. They also strongly believed in the removal of 'low-born servants who surrounded the king and who prevented the true nobles from occupying their rightful place in the affairs of the state' (i.e. Thomas Cromwell). Members included the Duke of Norfolk, the Earl of Surrey and Wriothesley (Lord Chancellor). The Progressives were the opposing faction who had contrary aims. These were to promote Protestantism. Members included the Duke of Hertford, Archbishop Cranmer and Sir Anthony Denny. In the final years of Henry's life he was in much pain due to swelling of his legs, he was overweight, he was also suffering from brain damage and a vitamin deficiency. ...read more.

The Conservatives has no more success in implementing their power after this event. The failures continued when they tried to get revenge for the fall of Howard, by trying to get Henry's sixth wife Catherine Parr off the throne based on her 'advanced' religious views. The Lord Chancellor, Wriothesley was chosen to present the evidence to Henry. Later Wriothesley duly appeared with a contingent of guards to arrest Parr; he was not told that the king had decided not to take action against his wife. This event once again did not go in favour of the Conservatives. It is believed that Henry did not believe the accusations and liked his new wife who was able to give him and his children the care and attention they needed. This point emphasises that Henry was always in control no matter what; only his decisions counted. The bad luck did not end there for the Conservatives for the Earl of Surrey was executed for 'unwisely hinting that his ancestry gave him as much right as anyone to challenge the throne'. Here is evidence that Henry was aware of his weak situation and not totally blind to the political situation around him. Therefore Henry must have known of the factional competition and played it to his own advantage to control them. ...read more.

The king left the factions simply to deal with more mundane matters in the Privy Council. The will is the centre of historic controversy since it was signed the day after Henry died. Yet it seems that the 'new' court under Edward VI would be full of Progressives. The reason that the Conservatives decreased in power and the Progressives increased was that Henry was unwilling to allow one faction to dominate, yet it seems the other faction won in the end. The evidence so far emphasises that Henry was always in control overall. He knew exactly whom he trusted and what was believable. The factions influenced Henry's decisions; but Henry only took serious action when he truly believed them or wanted to believe them. Other factor controlling Henry's judgment was his health, which affected his mood. Overall the power of the factions was limited by Henry's views on people and the situation. It is also evident that he favoured the Progressives more than the Conservatives. This is evident from his actions. Henry was aware of the factional problem therefore knew how to play one off the other. In many ways the 1540's saw a return to traditional kingship. Henry was pre-occupied with war, diplomacy and his status abroad. He may have been a lot more unsuccessful but it was still Henry who was in control. ?? ?? ?? ?? By Sundeep Mahil ...read more.