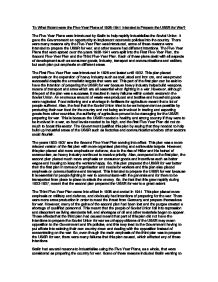 The Five Year Plans were introduced by Stalin to help rapidly industrialise the Soviet Union. It gave the Governement an opportunity to implement economic policies into the country. There were many reasons why the Five-Year Plan was introduced, some of these reasons were intended to prepare the USSR for war, and other reaons had different intentions. The Five Year Plans that were spread over the years 1928-1941 were split into the First Five-Year Plan, the Second Five-Year Plan and the Third Five-Year Plan. Each of these plans dealt with all aspects of development such as consumer goods, industry, transport and communications and welfare, but each plan put emphasis on different areas.

The First Five-Year Plan was introduced in 1928 and lasted until 1932. This plan placed emphasis on the expansion of heavy industry such as coal, steel and iron ore, and was proved successful despite the unrealistic targets that were set. This part of the first plan can be said to have the intention of preparing the USSR for war because heavy industry helps build weapons, means of transport and arms which are all essential when fighting in a war. However, although this part of the plan was a successs, it resulted in many failures within certain sectors in the Soviet Union. An enormous amount of waste was produced and textiles and household goods were neglected. Food rationing and a shortage in fertlisers for agriculture meant that a lot of people suffered. Also, the fact that the Soviet Union tried to be as independent as possible by producing their own food for the country and not being so involved in trading and exporting goods from other countries, the suffering of agriculture proved to be damaging for the USSR preparing for war. This is because the USSR needed a healthy and strong country if they were to be involved in a war, so food levels needed to be high, and the first Five Year Plan did not do much to boost this sector. The Government justified this plan by saying that they needed to help build up industrial areas of the USSR such as factories and communications before other sectors could flourish.

The years 1933-1937 saw the Second Five-Year Plan coming into effect. This plan was a more relaxed version of the fist plan with more organised planning and achievable targets. However, this plan placed alot more emphasis on defence, due to the rise of Hitler and his hatred of communism, so heavy industry continued to receive priority. Also, compared to the first plan, the second plan placed much more emphasis on consumer goods and incentives such as better wages and housing to keep the workers happy. So, this plan prepared the USSR for war better than the first plan in terms of organisation and needs for workers and this plan also placed emphasis on communications and transport. This intended to prepare the USSR for war because it is essential for people fighting in war to communicate with the generals and for them to be transported from place to place to attack the enemy. So, the fact that this grew rapidly during 1933-1937, meant that the second plan prepared the USSR for war to a great extent.

The Third Five-Year Plan came into effect in 1938 and ended in 1941. This plan placed more emphasis on military and defence, and obviously had intentions of preparing for the war. There were more arms production in order to meet the threat from Germany and prepare themselves for war. However, many of the gains of the second plan had been lost and the purges created a shortage of qualified personnel. This meant that the people of Soviet Union fell into repression and discontent as living standards fell, and shortages of oil and other materials began to appear. These effects that the third plan had caused meant that part of this plan did not have the intentions to prepare the Soviet Union for war as unhappy citizens of the USSR may mean opposition to the Government and it's policies, and this may lead to the Government having to put efforts into calming their own country down and dealing with the opposition instead of concentrating on the war. So, even though the main emphasis of the third plan was to prepare the USSR for war, there were many failures that this plan caused, which affected any of those intentions.

Stalin had several reasons to industrialise using the Five Year Plans, as a whole, that were considered as preparing the country for war. Some of these reasons included Stalin wanting to demonstarte how 'Socialism in One Country' works. Stalin believed that the capitalist West opposed countries which were based on communist ideas and believed that Western countries would eventually attack the USSR, therefor Stalin believed that indusrialisation was essential to ensure that the Soviet Union were victorious in any war that may arise. So, industrialistion was seen as patriotic and formed an important part of Stalin's policy of 'Socialism in One Country'. Stalin also wanted to mechanise agriculture and bring about self-sufficient autarky in the USSR. He believed that industrialisation would bring about greater production of food by farming, so would provide the citizens of the Soviet Union with necessities while the country was fighting in a war and could not trade. Stalin also wanted to build up a strong proletariat within the USSR because he knew that if war was declared, the working class would be able to make up a strong army and also while the men were out fghting, the women would still need to be strong and healthy enough to take over certain jobs in factories, mines and shops. So Stalin considered it essential to introduce the Five-Year Plans to prepare the Soviet Union for war.

However, there were many reasons why Stalin wanted to industrialise which had no intentions of preparing the country for war. One of these reasons was for Stalin to be seen as the heir of Lenin. One result of the Five-Year Plan was that it strengthened Stalin's position, as those who opposed to the Five-Year Plans were removed, and this resulted in Stalin exerting greater power and influence as the leader of the Soviet Union. This aim that Stalin wanted to achieve did not have much to do with preparing the USSR for war (although it created a more unified country in some ways) but had more to do with Stalin becoming a greater leader.

In conclusion, the Five Year Plans of 1928-1941 had many intentions, most of which were to prepare the USSR for war, but there were quite a few other reasons about why these plans were introduced. Other reasons included making the USSR a great and powerful country to portray to the rest of the world that Communism is a policy that can be a success, also to strenghten Stalin's power and influence over the Soviet Union.