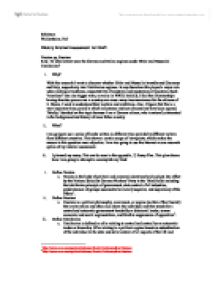 To what extent were the German and Italian regimes under Hitler and Mussolini Totalitarian?

Robinson Wollersheim, No1 History Internal Assessment 1st Draft Nazism vs. Fascism R.Q.: To what extent were the German and Italian regimes under Hitler and Mussolini Totalitarian? i. Why? With this research I want to discover whether Hitler and Mussolini transformed Germany and Italy, respectively into Totalitarian regimes. In my discretion this played a major role when looking at traditions, respectability of countries and reputations of countries. Such "emotions" can also trigger wars, as we so in WWII. Initially, I feel that Dictatorships having absolute power over a country can cause many inconveniences for the citizens of it. Hence, I want to understand their motives and ambitions. Also, I figure that this is a very important time period in which milestones and new dimensions have been opened. Thirdly, I decided on this topic because I am a German citizen, who is naturally interested in the background and history of ones father country. ii. What? I am going to use a series of books written in different time periods by different writers from different countries. This shows a certain scope of viewpoints, which makes the answer to this question more objective. I am also going to use the Internet as one research option of my internal assessment. ...read more.

Catholicism was also seen as a possible threat to the emerging fascist state. Hence, a concordat was attempted to improve church-state relations. Catholicism was considered the religion of most Italians, which was so deeply rooted in Italian life that could directly endanger the position of the fascist might. iii. Education a. Germany i. Education in Germany was largely controlled by the Nazis. The main subjects were history, biology and physical education. All of course indoctrinated and altered to shine a good light on the Nazi party and its style of rule. Special schools were build for the "most talented". This meant that from a very young age onwards, children in Germany were focused on the Nazi ideology, similar to the Youths, which I will talk about in the next paragraph. b. Italy i. Education was focused on Fascist ideas and ideology. Children were educated in physical education and military training. These are just examples to illustrate what Mussolini wanted to achieve. iv. Youths a. Germany i. Various youths' existed in Nazi Germany, all aiming to control the mind of German children. Hitler once described his views concerning the purpose of youths:" When an opponent declares, 'I will not come your side', I calmly say: 'Your child belongs to us already...In a short time, they will know nothing else but this community." ...read more.

Germany vs. Italy ii. Conclusion a. When looking back at my research and all the information I collected during it, I think it is fair to say that both ideologies and those implementing it, transformed the respective countries to a large extent into totalitarian regimes. Although, I would say that this phenomena did not occur in the conventional way. By definition, a totalitarian regime controls every aspect of life. When looking at the moment they came to power and the day they left, a great difference in many senses can be seen. Especially, when looking at how they controlled the peoples' minds'. Propaganda, Force, Speeches, youths and discrimination are all factors, which increased their influence. This integrated so quickly into the respective countries roots, so that it was inevitable that people would eventually believe what they heard. They would also obey by it because they the how brutal their measures could be. Power conveyed and achieved by force was one feature in these regimes. The other means was propaganda. New technology, new innovations enabled them to convey their messages and slogans whenever they wanted. They could also reach every member of their "community". They not only controlled adults. One of their ideas was to transform the young so that their ideology would be carried further with the next generation. 1 http://www.m-w.com/cgi-bin/dictionary?book=Dictionary&va=Nazism 2 http://www.m-w.com/cgi-bin/dictionary?book=Dictionary&va=fascism 3 http://www.m-w.com/cgi-bin/dictionary?book=Dictionary&va=totalitarian ...read more.