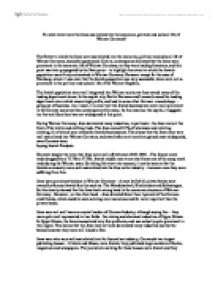 To what extent were the Jews assimilated into the economic, political and cultural life of Weimar Germany

To what extent were the Jews assimilated into the economic, political and cultural life of Weimar Germany? The Extent to which the Jews were assimilated into the economic, political and cultural life of Weimar Germany, should be questioned. Clearly, contemparies believed that the Jews were prominent in the economic life of Weimar Germany; as they were leading financiers, and this point was later propagated by the Nazi party - to highlight the extent to which the Jewish population were firmly entrenched in Weimar Germany. However except for the case of Hamburg; where it was clear that the Jewish population was very successful, Jews were not as prominent in the political and cultural life of the Weimar Republic. The Jewish population were well integrated into Weimar society as they owned many of the leading department stores. In the capital city, Berlin Hermann and Leonard owned the leading department store which ensure high profits, and lead to some other German owned shops - going out of business. As a result, it is clear that the Jewish businessmen were more prominent in the German economy than contemporary Germans. As this was also the capital, it suggests too that anti-Semitism was not widespread at this point. ...read more.

The typical Jewish community was divided into four groups - The wealthy old families, lawyers and bankers - They were proud of their high cultural milieu, and there contact with non - Jews of equal status. Many of them had honour titles and their children were commonly baptised at birth. A slightly lower group were the Businessmen, docters, lawyers and journalists. This group was considerably larger compared to the upper class families, however they were seen as being far less cosmopolitan. This sub group ranged from the newly appointed salesmen, to the affluent department store owner ( Hermann and Leonard ). Their sons could live an independent, wealthy lifestyle. Next were the Jews who had recently moved from small towns to the big city, they were commonly cattle or grain dealers turned urban businessmen. This group did not want much but to be accepted into the larger establishments. The lowest group were the Eastern Jews commonly referred to as 'Polacks' they made up the majority of the workman. By the end of 1923, The Jewish community in Berlin had created nineteen soup kitchens, seven shelters for the homeless and an employment information centre for the distute Jews. Many other large communities did the same. By 1930 - 1933 this operation had to be made on a larger scale. ...read more.

Each Jewish community was responsible for around 2,000 children - some of the parents were of different religious views. This shows that the Jewish population cared for the education of Jews and non - Jews alike. In 1932 the right was given to award A - level certificates, giving Jews the opportunity to carry onto university. However on the down side, during this time the two Jewish community school had around 1200 children - the maintenance of these schools cost the Jewish community around one third of its annual revenue. Jews were very important and creative in all walks of cultural life in the period 1918 - 1933. Weimar theatre was dominated by Jewish playwrights, directors and actors. Reinhardt, the Berlin director, incorporated music, dance and pantomime to the stage. German cinema too was dominated by the Jews. Ernst Toller, a leading playwright, had become a leftist and pacifist after World War I. During a prison sentence for the Bavarian Soviet Republic Revolt of 1919, he wrote several plays against capitalism and militarism. It can be seen that Jews were very well assimilated into the social, political and cultural life of Weimar Germany. In fact in some cases - they were the backbone to many structures of Weimar Germany, in particular the economy. They dominated many different trades and were well experienced bankers. ...read more.