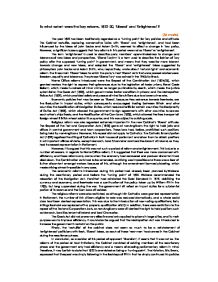 To what extent were the Tory reforms, 1822-30, 'Liberal' and 'Enlightened'? [36 marks] The year 1822 has been traditionally regarded as a 'turning point' for Tory policies and attitude. The Cabinet reshuffle, replacing conservative Tories with 'liberal' and 'enlightened', and had been influenced by the ideas of John Locke and Adam Smith, seemed to effect a change in Tory policy. However, a significant case suggests that Tory reforms in this period were not so 'liberal' or 'enlightened'. The term 'enlightened' is used to describe party members' open-mindedness to change and tolerance of new ideas and perspectives. 'Liberal Toryism' is a term used to describe the fashion of Tory policy after the supposed 'turning point' in government, and means that they were far more tolerant towards change and new ideas, and adopted the 'liberal' and 'enlightened' ideas suggested by philosophers John Locke and Adam Smith, who, respectively, wrote about 'natural rights' and economic reform. The three main 'liberal' ideas to which the party's most 'liberal' Acts that were passed related were freedom, equality and tolerance. ...read more.

Religious reform was also regarded extremely important in the new Cabinet's 'liberal' attitude. The Repeal of the Test and Corporation Acts (1823) gave all non-Anglicans the right to hold jobs and offices in central government and town corporations. These laws had, before, prohibited such positions being held by non-Anglicans. However, this repeal did not apply to Catholics. The Catholic Emancipation Act (1829) legalised the sitting of Catholics in both houses of parliament and allow them to obtain positions in all important offices of state, except Monarch, Lord Chancellor and Lord Lieutenant of Ireland, so they had increased representation in Parliament. However, it is argued that this was not such a period of reform and enlightenment. This is due to a number of reasons. In regards to Home Office reform, it is suggested that Peel was more concerned with efficiency, and these reforms only came when the economy had recovered and post-war discontent had died down. The Combination Acts had to be amended, as striking was impossible and there was a fear of further discontent amongst workers because of this, although the amendment banned picketing, which made striking almost impossible in any case. ...read more.

The Gaols Act did not prove very effective and only applied to prisons in large cities, and its main purpose was to improve efficiency. It could also be argued that the Metropolitan Act was introduced to increase the government's restraint on the public. Finally, the 'reshuffle' of the cabinet does not seem so much to be a reinstatement of 'enlightened' politicians with fresh, 'liberal' ideas, as each of these 'new men' had served in the Cabinet during the reactionary phase. In conclusion, as a revision of this period of apparent 'liberalism', it seems that it was not so. The reforms of the period all had limitations, the Cabinet consisted of existing members of the reactionary phase and the government only had efficiency and a means of evading parliamentary reform in mind. Therefore, it may be fair to state that 1822 is overstated as being a 'turning point'. The historian, Eric Evans, expressed that Liverpool was simply following in the footsteps of Pitt in that he simply continued his policies introduced before the Napoleonic War. Liverpool believed that it was unsafe to introduce reforms during the protest period after the war. After the war, when the economy had recovered, he continued with Pitt's reform and policies. 35/36 ...read more.