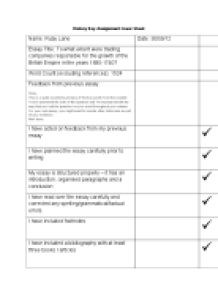 To what extent were the trading companies responsible for the growth of the British Empire in the years 1680-1740?

ï»¿History Key Assignment Cover Sheet Name: Ruby Lane Date: 30/09/12 Essay Title: To what extent were trading companies responsible for the growth of the British Empire in the years 1680-1740? Word Count (excluding references): 1524 Feedback from previous essay: Ruby, This is a quite excellent summary of the key points from the booklet. You've answered the bulk of the question and I'm impressed with the way that you had the question on your mind throughout your answer. For your next essay, you might want to include other historians as part of your evidence. Well done. I have acted on feedback from my previous essay ï¼ I have planned the essay carefully prior to writing ï¼ My essay is structured properly – it has an introduction, organised paragraphs and a conclusion ï¼ I have read over the essay carefully and corrected any spelling/grammatical/factual errors ï¼ I have included footnotes ï¼ I have included a bibliography with at least three books / articles ï¼ To what extent were the trading companies responsible for the growth of the British Empire in the years 1680-1740? From the 1680s through to the 1740s, the Empire expanded in a remarkable way due to the growth in trading to and from colonies or settlements and the increase of jobs from this; the profits and territorial gains from war and government policies and interventions within the UK or placed on trade. ...read more.

For instance: “the RAC transported 120,000 captured Africans to colonies […] thus enriching the wealth of British plantation owners”[7], sugar was widely exported by the RAC and 8 forts were built in Africa which, of course, made a positive impact on Britain. Another short lived company like the RAC was the South Sea Company (SSC). Created in 1711, the company gained its pillars from the war of Spanish succession which included the treaty of Utrecht and was formed because central and South America would be open. The company also opened up to take charge of the national debt in return for half a million pounds, a monopoly in the South Sea and the right to sell shares. The SSC was seen as a costly failure in hindsight but the public were not told about their false success, creating an illusion that the rich were investing in something worth while. Share prices in August 1720 were £1,000 but furiously dropped to £100. One benefit of the SSC was that it took the national debt into its own hands which enabled the government to not be “saddled with huge debts”. Trade was a strong aspect for the expansion of the Empire, but perhaps trade would not have grown if the government hadn’t intervened. One method of intervention was the navigational acts. ...read more.

It was vastly unpopular with the population and many wars were lost. The declining morale that came with the tragic deaths in the navy and the large taxes were putting people off: ?over 30 per cent of the total government expenditure during the Nine Years war and the War of Spanish Succession was financed by public borrowing?[11]. Wars like Jenkins? ear and Austrian succession were, arguably, pointless ? nothing seemed to be gained from these wars. Tax payer?s money was being wasted on these wars while relatives were dying. In conclusion, these three factors are all symbiotic and all completely supported each other: government helped trade which helped government which helped war which helped trade, and each built the Empire in their own ways. It would not have been possible to expand it in such a short space of time in such a magnitude without war, the government or trade. The booming trade industry and the Navy opened up jobs, increasing total output of the country making the Empire a bigger and economically better place. The development of ports due to trade boosted Britain, too. However, saying this, I believe that government had a larger effect because of its introduction of sophisticated banking. Others may argue against by mentioning that this would not have been needed if it wasn?t for trade but overall, each had an astounding effect on the economy and the strength of the Empire. If it wasn?t for these very reasons, we wouldn?t be the nation or world we are today living in. ...read more.