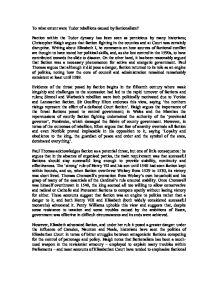 To what extent were Tudor rebellions caused by factionalism?

To what extent were Tudor rebellions caused by factionalism? Faction within the Tudor dynasty has been seen as pernicious by many historians; Christopher Haigh argues that faction fighting in the counties and at Court was certainly disruptive. Writing about Elizabeth I, he comments on how sources of factional conflict are thought to have tested her political skills, and, as she lost control in the 1590s, to have contributed towards the slide to disaster. On the other hand, it has been reasonably argued that faction was a necessary phenomenon for active and energetic government. Paul Thomas argues that although it did pose a danger, faction returned to its role as an engine of politics, noting how the core of council and administration remained remarkably consistent at least until 1589. Evidence of the threat posed by faction begins in the fifteenth century where weak kingship and challenges to the succession had led to the rapid turnover of factions and rulers; Simnel and Warbeck's rebellion were both politically motivated due to Yorkist and Lancastrian faction. ...read more.

The 'strong' rule of Henry VII and his son until 1540 had seen faction kept within bounds, and so, when faction overthrew Wolsey from 1529 to 1530, its victory was short lived. Thomas Cromwell's promotion from Wolsey's own household and his grasp of many of the essentials of the Cardinal's rule ensured stability. Once Cromwell was himself overthrown in 1540, the king seemed all too willing to allow conservative and radical or Catholic and Protestant factions to compete openly without lasting victory for either. These accounts suggest that faction was an engine to politics rather than a danger to it, and both Henry VIII and Elizabeth (both widely considered successful monarchs) advocated it. Penry Williams upholds this view and suggests that, despite some resistance to taxation and some troubles caused by the ambitions of Essex, government was effective in difficult circumstances and its ends were achieved. ...read more.

These accounts propose that faction needs to more closely defined. Haigh suggests that the bitter disputes between Leicester and Essex have been wrongly termed factional, as 'most of their relations were quite amicable... [and] there was never a Sussex faction of any size'. Ultimately, there was an element of both similarity and continuity in the period as most of the rebellions were politically motivated - starting with Warbeck's rebellion in 1491 until the end of the period with Essex's rebellion in 1601 - and political motivation always involved faction. This displays the clear political motives present across the period, which is an arguably unique consistency. Religious grievances, for example, were not present throughout the Tudor reign; it was only due to reformation in 1532 that religion became a factor that linked the previously disparate groups together. Both the consistency and frequency of the impact factionalism had on rebellion therefore suggest it was undeniably important in causing it. ...read more.