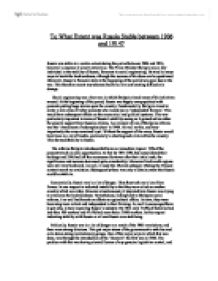 To What Extent was Russia Stable between 1906 and 1914? Russia was stable to a certain extent during the period between 1906 and 1914; however in essence it wasn't entirely so. The Prime Minister Stolypin was a key individual in the stability of Russia; foremost in social engineering. He tried in many ways to break the backwardness, although the success of his ideas can be questioned. Moreover, Russia's financial state at the beginning of the period was poor due to the war. This therefore meant any schemes had to be low cost creating difficulty in change. Social engineering was a key area in which Stolypin aimed many of his initiatives around. At the beginning of the period, Russia was hugely overpopulated with peasants putting huge strains upon the country. Fundamentally, Stolypin aimed to create a new class of richer peasants who would run as 'independent farmers.' This would have subsequent affects on the economical and political systems. This was particularly important in terms of Russia's stability seeing as it gained active rather the passive support from Russian citizens. ...read more.

As now, they were becoming more reliant and independent in their farming. As well it encouraged them to get jobs; in turn improving Russia's industry. By 1914 only 17.8% of factories had less than 100 workers and 41.4% had more than a 1000 workers. In this respect indicating stability with Russia or at least Russia was stabilising. Politically, Russia was in a lot of danger as a result of the 1905 revolutions, and there were strong divisions. This put major stress of the government to stabilise and calm down strong revolutionary groups. One of the major ways in which this was done, was through the introduction of the 'Dumas's' the first was in 1906. The problem with this was having elected Dumas of any genuine legislative control, and was mainly controlled by the Tsar. It was dissolved after two months indicating it didn't have any major success. Then by the second of the Dumas in 1907, there was a lot of opposition particularly towards Stolypins' land programme. Disagreement lay within the Duma, as well as between the government and the Duma. ...read more.

At the same time, it rid of one of most important men in stabilising Russia, throwing Russia Backward again. Some events depicting the unrest and public disorder in Russia were the 'Belis Affair' in 1913; a Semitic attack and 'Luna Goldfields Massacre' in 1912. The Goldfields along the river Lena in April was under horrific violence and disturbance; workers petitioning for better employment and conditions. 270 were killed and 200 injured. This was because revolutionary parties tried to have control, indicating that even though the Dumas's split the opposition, they weren't overly effective. Again portraying that Russia was quite unstable. Overall, Russia was stable to a certain extent. Stolypin achieved his aims of creating 'capitalist peasants.' This in turn improved Russia's agriculture and Industry. However there were still continuous uprising portraying the fact that peasants still weren't happy depicting instability. At the same time it indicated that even though The Duma's were put in place to split opposition. It didn't do so effectively otherwise there wouldn't have been riots. Financially, Russia was relying on France which mean that it wasn't independently stable, however enabled them the chance to improve and break out of the vicious circle of backwardness. ...read more.