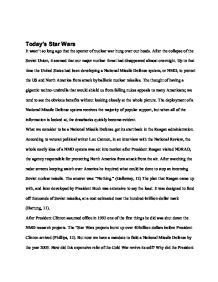 Today's Star Wars It wasn't so long ago that the specter of nuclear war hung over our heads. After the collapse of the Soviet Union, it seemed that our major nuclear threat had disappeared almost overnight. Up to that time the United States had been developing a National Missile Defense system, or NMD, to protect the US and North America from attack by ballistic nuclear missiles. The thought of having a gigantic techno-umbrella that would shield us from falling nukes appeals to many Americans; we tend to see the obvious benefits without looking closely at the whole picture. The deployment of a National Missile Defense system receives the majority of popular support, but when all of the information is looked at, the drawbacks quickly become evident. What we consider to be a National Missile Defense got its start back in the Reagan administration. According to veteran political writer Lou Cannon, in an interview with the National Review, the whole costly idea of a NMD system was set into motion after President Reagan visited NORAD, the agency responsible for protecting North America from attack from the air. After watching the radar screens keeping watch over America he inquired what could be done to stop an incoming Soviet nuclear missile. ...read more.

(Galloway, 18) The concept is called "hitting a bullet with a bullet" and as you can imagine the technological challenges are immense. The interceptor rockets must travel at speeds of 12,000 mph and reach altitudes of 100 miles; with these speeds and altitudes the minutest change in direction translates to a miss downrange. Though the technological challenges are daunting, they are not the only obstacles to deployment. The balance of power between the US and Russia has been a delicate thing over the past 50 years. Over this time Washington and Moscow have signed many arms control treaties, one of them being the Anti-Ballistic Missile treaty, which specifically bans the development of a National Missile Defense system. Russia has made no attempt to hide its distaste of the US fielding a NMD system. Russia's Foreign Minister recently stated: "The prevailing system of arms control agreements is a complex and quite fragile structure. The collapse of the ABM treaty, would, therefore, undermine the entirety of disarmament agreements concluded over the last thirty years." (The Progressive, 8) Not only would the fielding of an NMD by the United States upset the balance of power, it may also raise feelings of strategic inferiority in the Russians. It would do nothing to encourage them to adhere to the START II treaty that drastically reduces the nuclear arsenal of both the U.S. ...read more.

(O'Hanlon, 70) These TMDs do not fall under the 1972 treaty, as their specifications do not bring them into the national defensive role. We need to address the real threat, and not waste our money on massively expensive projects that put us into contention with other nations. The arms race is as old as the human race. We have always been after the ultimate defense that will render our aggressors attacks futile. The Great Wall of China, Hadrian's Wall, and the Maginot Line, all were expected to keep out the invaders and protect the citizens within. All failed. It would seem that the US National Missile Defense policy is charged with the political agendas of powerful corporations and politicians who wish to be re-elected. The big three of missile defense: Boeing, Lockheed Martin and Rayethon, have already been given billions of taxpayer dollars to develop this system, they have delivered failure after failure. Continuing down this exorbitantly expensive route can destabilize the delicate power balance that we maintain with Russia, China, France and other nuclear capable countries. It is time we identify the more likely threat to the US and concentrate our efforts in that area. The Patriot Missile system and others like it should continue to receive funding, to protect our men and women in uniform, and we should be more alert to subversive attacks on our own soil. ...read more.