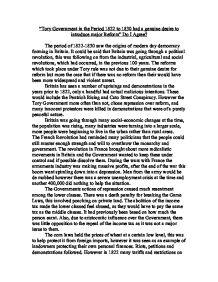 &quot;Tory Government in the Period 1822 to 1830 had a genuine desire to introduce major Reform&quot; Do I Agree?

"Tory Government in the Period 1822 to 1830 had a genuine desire to introduce major Reform" Do I Agree? The period of 1822-1830 saw the origins of modern day democracy forming in Britain. It could be said that Britain was going through a political revolution, this was following on from the industrial, agricultural and social revolutions, which had occurred, in the previous 100 years. The reforms which took place under Tory rule was not due to their genuine desire for reform but more the case that if there was no reform then their would have been more widespread and violent unrest. Britain has seen a number of uprisings and demonstrations in the years prior to 1822, only a handful had actual malicious intentions. These would include the Pentrich Rising and Cato Street Conspiracy. However the Tory Government more often than not, chose repression over reform, and many innocent protestors were killed in demonstrations that were of a purely peaceful nature. Britain was going through many social-economic changes at the time, the population was rising, many industries were turning into a larger scale, more people were beginning to live in the urban rather than rural areas. ...read more.

Robinson's desire to reduce domestic duties gave him a reputation as a liberal. This worked well with Huskissons ideas on free trade. Robinson wanted to reduce duties on imported raw materials. Such items as wool, silk, tea and rum were reduced in duty to encourage more demand for them. This would help provide economic stability. Indirect taxation was reduced in the period 1821-1827. This would bring more goodwill towards the lower classes as they had to pay the same amount of indirect tax as the higher classes and this was a source of much resentment towards the Tories. This could be a show of genuine desire to reform, as the Tories wanted to appear more concerned about the lower classes. However this would also help Britains economy, but this was masked with a show of goodwill. While the standard of living was being improved by the economic reforms, the living and working conditions and also legal system had to be addressed. Robert Peel had to supervise these improvements as he had administrative and organizational skills. Trade Unions which had previously been seen as a threat to the stability of the state as in 1799 when they were passes, the state had to be united during the middle of the Napolionic War. ...read more.

This had to be repealed in the Emancipation Act was to be passed to. However this could be classed as one of the most significant reforms passed by the Tories in this period. It led to their downfall and the Whigs coming to power in 1830. The Reform Act was passed two years later. I don't think that the Tories of the time had a genuine desire to reform the country, however they were realists. They knew that if reform were not brought about then they would at least be faced with being out of office and at the worst a civil war. It was all part of Britain coming out of the post Napolionic depression era for good. If these reforms had not been brought about then Britain would have been faced with the great depression making their economy less and less stable. Unemployment would have not receded, and discontent among the people would have still been in evidence. It was the very start of Britain becoming a more modern and democratic power which would put them in an excellent situation ready for their empire building. The Tories at the time were just adapting the Government to make way for a more democratic future. ...read more.