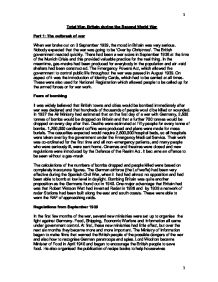 Total War, Britain during the Second World War Part 1: The outbreak of war When war broke out on 3 September 1939, the mood in Britain was very serious. Nobody expected that the war was going to be 'Over by Christmas'. The British government reacted quickly. There had been a war scare in September 1938 at the time of the Munich Crisis and this provided valuable practice for the real thing. In the meantime, gas-masks had been produced for everybody in the population and air-raid shelters had been constructed. The Emergency Powers Act, which allowed the government to control public life throughout the war was passed in August 1939. On aspect of it was the introduction of Identity Cards, which had to be carried at all times. These were also used for National Registration which allowed people to be called up for the armed forces or for war work. Fears of bombing It was widely believed that British towns and cities would be bombed immediately after war was declared and that hundreds of thousands of people would be killed or wounded. In 1937 the Air Ministry had estimated that on the first day of a war with Germany, 3,500 tonnes of bombs would be dropped on Britain and that a further 700 tonnes would be dropped on every day after that. Deaths were estimated at fifty people for every tonne of bombs. 1,250,000 cardboard coffins were produced and plans were made for mass burials. The casualties expected would require 2,800,000 hospital beds, so all hospitals were taken over by the government under the Emergency Medical Service. Their work was co-ordinated for the first time and all non-emergency patients, and many people who were seriously ill, were sent home. Cinemas and theatres were closed and new regulations were introduced by the Defence of the Realm Act. It became an offence to be seen without a gas-mask The calculations of the numbers of bombs dropped and people killed were based on completely inaccurate figures. ...read more.

So government propaganda fell into three categories. Stories and photographs were censored so that the British people were prevented from hearing the worst effects of German bombing. But at the same time, stories were invented which described British heroism in the face of German attacks. A more inventive form of propaganda was carried out by the Ministry of Information, which produced films to warn and encourage the British people about the dangers that they were facing and how they could protect themselves. These were all sponsored by the government. Perhaps most successful of all were feature films that presented a positive image of the war effort, even in defeat. Films like 'F for Freddie' and 'In which we serve', showed the British forces fighting back against all odds. What effects did bombing have on industry? The effects of bombing on industry were much less severe than had been expected. It was one thing to drop bombs on a large city, where there were many houses, but quite another to try to hit a target like a factory. In addition, most German bombing was at night and was not aimed at specific targets. By and large it failed to put industry out of action and most factories were able to resume production within two to three days of being hit. From early 1941 attacks on Britain became less serious. The last major attack was the Belfast Blitz in April 1941, which killed more than a thousand people. At the same time the Royal Air Force, and later the Unites States Army Air Force, began to bomb Germany. The attacks on German targets were much more severe than the Blitz. For every tonne of bombs dropped by the Luftwaffe on British cities, the Royal Air Force and the US Army Air Force dropped 315 tonnes on Germany. Allied bombing also proved much less damaging than was expected. ...read more.

Women were sacked so that men could get their jobs back. All over the country, women were dismissed after years of hard work. All kinds of advertisements put pressure on women to go back to the home, just as they had put pressure on women to be careful and not waste anything for the last six years. When women went to Labour Exchanges (the forerunners of job centres), they found that the chances of getting a job were slim. The government stated that men should have priority over women for all jobs. The official government line was: It is doubtless true that there are many jobs done during the war by women for which men are better suited, both mentally and physically. And, if there is to be a nation in the future, there must be children and children mean homes and endless chores.. So that there must naturally be a drift back from the services and the factories to domestic work. In one sense, however, the government's attitude was understandable and many women accepted it. Men who had been in the forces for years needed and deserved work when they were 'demobbed' (demobilised). Equality for women needed a prolonged period of peace and was not achieved until more than forty years after the end of the war. The Second World War did result in major changes in Britain. The Welfare State that was introduced from 1946 to 1948 was a revolution in the ways that poverty and ill health were tackled. The Butler Education Act was the first attempt to provide some form of equality of opportunity for children in Britain. But the cost of the war had been much greater than anyone realised at the time. Within a few years of it being set up, the Welfare State had to be cut back and charges introduced for some services. It was nearly eight years after the end of the war before all forms of rationing were abolished in Britain. ?? ?? ?? ?? 2 1 1 ...read more.