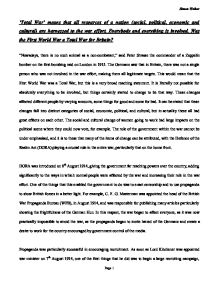 'Total War' means that all resources of a nation (social, political, economic and cultural) are harnessed to the war effort - Everybody and everything is involved. Was the First World War a Total War for Britain?

'Total War' means that all resources of a nation (social, political, economic and cultural) are harnessed to the war effort. Everybody and everything is involved. Was the First World War a Total War for Britain? "Nowadays, there is no such animal as a non-combatant," said Peter Strasse the commander of a Zeppelin bomber on the first bombing raid on London in 1915. The Germans saw that in Britain, there was not a single person who was not involved in the war effort, making them all legitimate targets. This would mean that the First World War was a Total War, but this is a very broad reaching statement. It is literally not possible for absolutely everything to be involved, but things certainly started to change to be that way. These changes affected different people by varying amounts, some things for good and some for bad. It can be stated that these changes fall into distinct categories of social, economic, political, and cultural, but in actuality these all had great effects on each other. ...read more.

begin a large recruiting campaign, which resulted in an average of 33,000 men joining the armed forces every day, into what became known as Kitchener's Army. Unfortunately, this was unable to sustain a high enough level of enrolment, and so on January 25th, 1916 the first Military Service Act was introduced, which brought in conscription for single men, aged between 18 and 40. This was further extended on May 16th, 1916 to include married men of the same age. Conscription and national service extended so far that by the end of the war, nearly every family in Britain had lost someone, adding to the idea that this was a total war. This even included those working in reserved occupations, such as merchant seamen, who experienced a terribly difficult time working in the convoys to bring across vital supplies to the British people. There job was so tough, that voluntary, and then enforced rationing had to be introduced as the importation of food into the country fell so low. ...read more.

The new factories employed mainly women, which had a crucial bearing on other social and cultural aspects of the war. In order to be able to afford the war, the government doubled income tax and super tax in 1915, and increased the duty of beer to 17s 3d per barrel. This affected everyone, as everybody now was paying for the war effort, which added to the amount that the Chancellor of the Exchequer rose through an initial war loan of �350,000,000. Due to the sinking of food convoys in the Atlantic by German U-Boats, food shortages became even more severe. Eventually, in November 1917, voluntary rationing was introduced in London and the South East, which only led to longer queues and higher food prices. This rationing became compulsory on 25th February 1918, and it was then extended across the remainder of country in April. This affected everyone, as not even the upper classes could get more food than they were allowed, adding to the concept of total war. Simon Walker Page 1 ...read more.