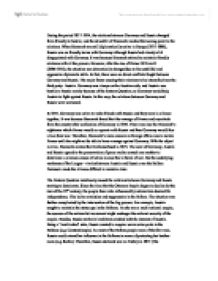 During the period 1871-1914, the relations between Germany and Russia changed from friendly to hostile, and the downfall of Bismarck marked the turning point to the relations. When Bismarck was still diplomatically active in Europe (1871-1890), Russia was on friendly terms with Germany although Russia had already a bit disappointed with Germany. It was because Bismarck strived to maintain friendly relations with all the powers. However, after the rise of Kaiser William II (1890-1914), the situation was dramatically changed due to his unskillful and aggressive diplomatic skills. In fact, there were no direct conflicts fought between Germany and Russia. The major factor causing their relations to be intensified was the third party- Austria. Germany was always on the Austrian side, and Austria was hostile to Russia mainly because of the Eastern Question, so Germany would help Austria to fight against Russia. In this way, the relations between Germany and Russia were worsened. In 1873, Germany was active to make friends with Russia and they were in alliance together. It was because Bismarck feared that the revenge of France and any attack from the country after unification of Germany in 1870. There was also the Bismarck's nightmare which France would co-operate with Russia and then Germany would face a two-front war. Therefore, Bismarck's main concern in foreign affairs was to isolate France until she might not be able to have revenge against Germany. With the object in view, Bismarck created the Dreikaiserbund in 1873. ...read more.

The result was the Reinsurance Treaty of 1887 and it was signed without the knowledge of Austria. At this stage (1871-1890), under Bismarck's diplomatic skill and favorable circumstances, Germany was merely able to maintain the friendship with Russia. However, after the downfall of Bismarck, the relations between Germany and Russia gradually turned into hostility without any repair due to the blunders of the Kaiser William II. The first blunder made by William II was the abandonment of Russian link. He was much influenced by Holstein, who was anti-Russian, German foreign policy now aimed at friendship with Austria and because William disliked the complexity of Bismarck's alliances a more open style of diplomacy was attempted. In 1890, Germany was surprisingly rejected the Russia's proposal of the renewal of the Reinsurance Treaty for six years. There was the estrangement of Russia from Germany. They were not on the friendly terms at all. The Kaiser's policy then, aroused the suspicion and fear of both France and Russia. This led to a Franco-Russian rapprochement and brought the signing of a military convention (The Franco-Russian Alliance). From then on, the relationship between Russia and Germany started to become hostile, finally leading to a direct war. Another conflict between the two was concerning nationalism. Nationalism in the 19th century had reached its climax. The primary movements were Pan-Germanism and Pan-Slavism. The Pan-German Movement aimed at uniting all the Germans of Central Europe under one great German state. ...read more.

After the Sarajevo Assassination broke out in 1914, Germany was truly at war with Russia. During this event, Russia openly declared that she would not tolerate the destruction of Serbia as it was an independent state in the Balkans and Serbia had the right to have her territorial integrity. It also implied that Russia would help defend Serbia if Austria started a war on Serbia. Germany backed up Austria by issuing a "blank cheque" to Austria due to their close relations while Russia helped Serbia also for the same reason. Serbia was the only state in the Balkans which was willing to be subservient to Russian influence, and the Russian government could not afford the loss or destruction of the Russo-Serbian friendship. On 30th July, Russia declared the general mobilization. By then, Germany had no choice but to follow the Schlieffen Plan of 1905 to declare war on Russia on 1st August, 1914. The First World War broke out. To conclude, with the presence of Bismarck (1871-1890), though there were a few conflicts between Germany and Russia, they could immediately be settled by Bismarck, and maintained their friendship. But since William II refused to renew the Reinsurance Treaty in 1890, the Russo-German relation was turned into an irremediable situation. Russia allied with Britain and France and got rid of the fear of being isolated. Worse still, the relations between Serbia and Austria became more and more hostile over the Eastern Question. This obliquely worsened the Russo-German relation because Serbia was backed by Russia while Austria was supported by Germany. Consequently, Germany and Russia fought against each other in the First World War in 1914. ?? ?? ?? ?? ...read more.