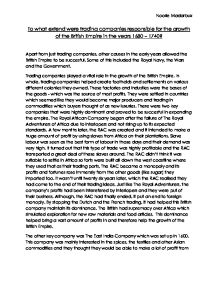 To what extend were trading companies responsible for the growth of the British Empire in the years 1680 - 1740? Apart from just trading companies, other causes in the early years allowed the British Empire to be succesful. Some of this included the Royal Navy, the Wars and the Government. Trading companies played a vital role in the growth of the British Empire. In whole, trading companies helped create footholds and settlements on various different colonies they owned. These factories and industies were the bases of the goods - which was the source of most profits. They were settled in countries which seemed like they would become major producers and trading in commodities which buyers thought of as new luxuries. There were two key companies that were highly dominant and proved to be succesful in expanding the empire. The Royal African Company began after the failure of The Royal Adventurers of Africa due to interlopers and not rising up to its expected standards. A few months later, the RAC was created and it intended to make a huge amount of profit by using slaves from Africa on their plantations. Slave labour was seen as the best form of labour in those days and their demand was very high. ...read more.

The Glorious Revolution was a time when James II was put down from the throne. In his position, he was replaced by the Dutch king, William III (also known as William of Orange). This event ended the disagreement between Dutch and Britain and formed a merger between these two countries. In the end, Britain received the Indian textiles trade which left the Dutch with the spice trade. Soon later, the British trade started to grow with the importing and exporting of materials and fabrics to overtake its Dutch rivals. It had its own stock exchange that was set up and futhermore, it was able to lend from the bank at a low interest rate. The EIC began to develop immensly and grow to 'have its own settlements, its own diplomats, even its own army'. 1 Apart from just trading companies, there were other reasons responsible for the British Empire. One of them was the Royal Navy. It had Oliver Cromwell as its leader and became more involved in European affairs. Still having the Dutch as rivals, England fought three wars against them. They ended up destroying the Dutch trade and shipping and replaced them as the most dominant of the seas. ...read more.

This treaty allowed the British to gain the Asiento. This allowed them to trade over the seas whenever they wanted - increasing sales and profits. The Asiento was known to 'help British wealth creation considerably and too boost British power'4. All in all, there were many other factors that contributed towards the expansion of the British Empire. Even though these other points led towards this development, I think trading companies were highly responsible. I think this because: trading companies were the primary source of beginning an Empire. Without these companies being succesful, there would not be a chance to keep improving and updating the Empire. These trading companies created the footholds which was basically the industries/factories holding the products/materials which increased their profit rates. The settlements were also a starting point for the British Empire as they continuosly traded there and turned them into foremost manufacturers. The Royal African Company and The East India Company helped the British keep accelerating and get larger in size. To further back my argument of trading companies, the South Sea Company also was linked in the development of the empire. This company did this to help towards the British Empire. Therefore, trading companies were greatly involved in the development towards the British Empire. They started the phase of making the Empire the most successful of that time and by finally turning 'merchants into multinationals'. ...read more.