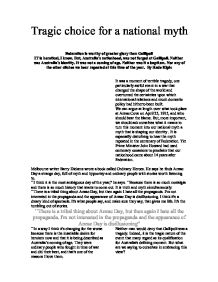 Tragic choice for a national myth - Federation is worthy of greater glory than Gallipoli.

Tragic choice for a national myth Federation is worthy of greater glory than Gallipoli IT is heretical, I know. But, Australia's nationhood, was not forged at Gallipoli. Neither was Australia's identity. It was not a coming of age. Neither was it a baptism. Nor any of the other cliches we hear repeated at this time of the year. By Rade Kipic It was a moment of terrible tragedy, one particularly awful event in a war that changed the shape of the world and overturned the certainties upon which international relations and much domestic policy had hitherto been built. We can argue at length over what took place at Anzac Cove on April 25, 1915, and who should bear the blame. But, more important, we should ask ourselves what it means to turn this moment into our national myth a myth that is shaping our identity . It is especially disturbing to hear the myth repeated in the centenary of Federation. Yet Prime Minister John Howard had used centenary occasions to proclaim that our nationhood came about 14 years after Federation. ...read more.

That a country cannot have a true national identity without spilling blood? That a political process, rather than a war, is a bit sissy, not suited to a nation of heroes? That men have to die and women suffer before we can be satisfied with history? Anzac Day is not, we hear, a glorification of war. Yet to link it with nationhood and to write of it, as The Australian's editorial did on April 25th 2001, as ``a reference point in the searching for identity'', pushes into the shadows the building of Australia's federal democracy. There is a widespread related view that the centenary of Federation would be more exciting if the commonwealth had been created by a war of independence. If only Edmund Barton had led the charge against the English oppressors, tearing down the Union Jack, refusing at gunpoint to take the oath of allegiance, we would not have had to wait until 1915 for our moment of nationhood. Instead, Barton followed a peaceful path, one he anticipated in his maiden speech to the NSW parliament in 1879, quoting Homer: ``That man is bound by no social, religious and domestic tie who would court civil war with all its horrors.'' ...read more.

The only enduring identity all Australians share is that provided by our commitment to a democratic constitutional framework for resolving our differences. This was set down in 1901. To honour the memory of those who have died in the service of their country is a good thing. But it is another thing to say that this defines us as a nation. It is a myth that excludes many - not just women but all who are not personally nourished by its imagery. It is a myth that reinforces the regrettable view that law and democratic politics are not noble alternatives to war. Australia's founders should be role models, not historical rejects. They were as robust, strong-minded and stout-hearted as any could want. Some of the men were virile indeed. But they would turn over in their graves to learn that in 2003 we find our moment of nationhood in war rather than in their work. Rade Kipic The Sunday Mirror Word Count excluding (heading etc.) 897 words ...read more.