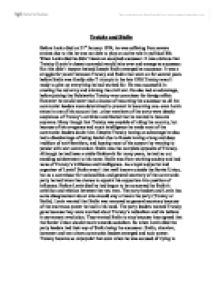 Trotsky and Stalin Before Lenin died on 21st January 1924, he was suffering from severe strokes due to this he was not able to play an active role in political life. When Lenin died he didn't leave an accepted successor. It was obvious that Trotsky (Lenin's closest comrade) would take over and emerge as successor. But this didn't happen instead Joseph Stalin emerged as successor. It was a struggle for power between Trotsky and Stalin that went on for several years before Stalin was finally able T triumph in the late 1920.Trotsky wasn't ready to give up everything he had worked for. He was successful in creating the red army and winning the civil war. ...read more.

Despite Trotsky having an advantage he also had a disadvantage of being Jewish due to Russia having a long and deep tradition of anti-Semitism, and loosing most of his support by wanting to persist with war communism. Stalin was the complete opposite of Trotsky. Although he had been a stable Bolshevik for many years, he had no out standing achievement to his name. Stalin was from working society and had none of Trotsky's brilliance and intelligence. As a loyal supporter and organizer of Lenin? Stalin wasn't that well known outside the Soviet Union, but as a commissar for nationalities and general secretary of the communist party he had taken the chance to appoint his supporters into position of influence. ...read more.

So when Lenin died the party leaders had their say of Stalin being the successor. Stalin, zinoviev, kamenev and two others communist leaders emerged and took power. Trotsky became so unpopular that even when he was accused of trying to split the communist party and wanting power for himself, he only had a few people that were willing to defend him against his charged. The kornilov affair Trotsky was let out of prison and tool his place in the petrogrand soviet. Earlier that year he was elected as chairman of the Petrograd soviet, and the new presidium has a Bolshevik majority, a couple of weeks later the Petrograd soviet decided to appoint a military revolutionary committee, but the Bolsheviks saw in the committee a means of getting all armed forces in the area under Bolsheviks control. Trotsky himself became a leading figure. The committee had also a pro-bolshevik majority Trotsky ans his R.M.C ...read more.