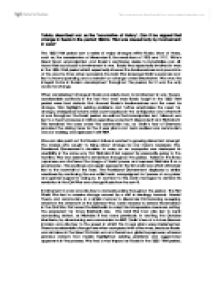 Trotsky described war as the 'locomotive of history'. Can it be argued that change in Russia in the period 1855 to 1964 was caused only by involvement in wars?

Trotsky described war as the 'locomotive of history'. Can it be argued that change in Russia in the period 1855 to 1964 was caused only by involvement in wars? The 1855-1964 period saw a series of major changes within Russia. Most of these, such as, the assassination of Alexander II, the revolutions of 1905 and 1917, Witte's Great Spurt, emancipation and Russia's continuing desire to industrialise can all trace their roots back to involvement in war. Russia was repeatedly involved in wars in the 1855-1964 period which repeatedly showed the backwardness and poor state of the country. Even when successful, the Cold War increased Stalin's paranoia and led to heavy spending and a restraint on change under Khrushchev. War was the integral factor in Russian development throughout the period, but it was the only cause for change. When considering if change in Russia was solely down to involvement in war, there is considerable continuity in the fact that most wars Russia fought in the 1855-1964 period were bad defeats that showed Russia's backwardness and the need for change. War highlights existing problems and further emphasises the need for change, widespread reforms were commonplace in the anticipation and aftermath of war throughout the Tsarist period. ...read more.

The Civil War had also led to Lenin conceding defeat, as Nicholas II had done previously in drafting the October Manifesto, by abandoning war communism for NEP. Stalin's fear of a future German invasion was also key to the speed in which the 5 year plans were implemented. There is considerable change here when compared with other wars, because Russia was victorious in the Great Patriotic war and became a global superpower, whereas previous defeats had merely highlighted existing problems and aggravated opponents in the process. War had a vast impact on Russia in the 1855-1964 period, and involvement in wars had a significant impact on the development of the Russian state. Throughout the period, the Tsarist and Communist regimes shared a common goal, to industrialise. This shared aim was set about in different ways - Stolypin and Stalin in particular had seen the need to boost agriculture in order to support heavy industrialisation, whereas the policies of Witte and Lenin were less focused on this issue. Whereas Stalin's main motivation could be traced back to war, Stolypin and Witte appeared to have more concern for the masses when implementing their policy. ...read more.

The Cheka heavily intensified aspects of repression seen under the 3rd section and Okhrana, and the KGB would continue to do so. Concessions brought about by the rulers as a result of war were also met with repression, such as Stolypin's necktie and in particular the unprecedented terror seen under Stalin, who believed that ''death is the answer to all problems''. The success of opponents was in part due to war, as best demonstrated by the February and October revolutions, however well timed reforms, shown by war to be badly needed, limited their effectiveness. Repression was used to rulers to keep their grip on power and maintain autocracy, not because of war. War was the integral factor in Russian development throughout the period. The First World War in particular brought about a complete shift in ideology and the creation of the world's first communist state, but also paved the way for the fast industrialisation of Russia and a shift in focus from agriculture to industry. War had repeatedly shown Russia as a backward, weak nation however victory in 1945 had established Russia as a global superpower. Despite its obvious importance, war was not the only locomotive of change within Russia during the 1855-1964 period. Change in Russia was not solely down to involvement in wars. ...read more.