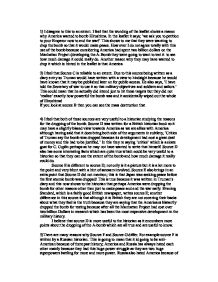 1) I disagree to this to an extent. I feel that the wording of the leaflet shows a reason why America wanted to bomb Hiroshima. In the leaflet it says; 'we ask you to petition to your Emperor now to end the war!' This shows to me that they were wanting to drop the bomb so that it would make peace. How ever I do not agree totally with this use of the bomb because considering America had spent two billion dollars on the Manhattan Project (developing the A-Bomb they were going to want to test it to see how much damage it could really do. Another reason why they may have wanted to drop it which is hinted in the leaflet is that America 2) I feel that Source C is reliable to an extent. Due to this source being written as a diary entry so Truman would have written with a view to hindsight because he would have known that it may be published later on for public access. He also says, 'I have told the Secretary of war to use it so that military objectives and soldiers and sailors.' This could mean that he actually did intend just to hit these targets but they did not 'realise' exactly how powerful the bomb was and it accidentally wiped out the whole of Hiroshima! ...read more.

5)There are many reasons why Source F and Source G differ. For example source F is written by a Russian historian. This is going to mean that it id going to be anti-American because of there past history; America and Russia has always hated each other mainly because they had this huge power struggle as they are two huge superpowers battling for more and more power. Russia also hated America because of the cold war and the fact they were ahead of Russia with military developments. Russia also disagreed with Americas use of the A-Bomb because they could see that the reason why they were really wanting to drop it was to scare the Russians and try and stop the Russians from taking over countries in the east hence why the cold war started. Source G is written by The US Secretary of State in 1945 so this is going to be trying to cover the Americans back and he will be writing with a view to hindsight so it shows America in a different light because it is being published to the public. The two sources are also written at different times which may effect what they say for example; Source G is written in 1945 and Source F is written in 1984 which was also after the cold war which will effect what the Russian says. ...read more.

There was another main reason why the Americans wanted to drop the bomb and this was that of revenge. There were two main factors which contributed to this feel of wanting revenge and these were; the 'sneak' attack of Pearl harbour and the large percentage of American service men that were in POW camps and the torture that they had to suffer while they were in these Japanese camps. The Americans were absolutely stunned by the attack of Pearl Harbour because the Japanese carried out the attack on a peaceful Sunday morning when everyone was at church and relaxing and the Americans did have the slightest clue that the Japanese were flying over because they did not really take notice of there radar; this was so humiliating for the Americans that the Japanese had flown all the way from Japan to attack America and no one even notice because they dismissed the radar pictures as their own planes coming in from the main land. As source D suggests; the Americans dropped the bomb to 'show off' to the Russians about how powerful they were and that they should try and take over any land in the east Obviously, peace was an important headline reason, but the other reasons stated above and in the sources also played a major part in the Americans thoughts when planning the dropping of the bomb. ...read more.