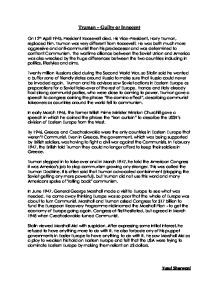 Truman - Guilty or Innocent On 12th April 1945, President Roosevelt died. His Vice-President, Harry Truman, replaced him. Truman was very different from Roosevelt. He was both much more aggressive and anti-communist then his predecessor and was determined to confront Communism. The wartime alliance between the Soviet Union and America was also wrecked by the huge differences between the two countries including in politics, lifestyles and aims. Twenty million Russians died during the Second World War, so Stalin said he wanted a buffer zone of friendly states around Russia to make sure that Russia could never be invaded again. Truman and his advisors saw Soviet actions in Eastern Europe as preparations for a Soviet take-over of the rest of Europe. France and Italy already had strong communist parties, who were close to coming to power. Truman gave a speech to congress coining the phrase "the domino effect", describing communist takeovers as countries around the world fell to communism. In early March 1946, the former British Prime Minister Winston Churchill gave a speech in which he coined the phrase the "iron curtain" to describe the USSR's division of Eastern Europe from the West. ...read more.

The capital, Berlin, was also split into four zones. The USSR took huge reparations from its zone in eastern Germany, but Britain, France and America tried to improve conditions in their zones. In June 1948, Britain, France and America united their zones into a new country, West Germany. On 23 June 1948, they introduced a new currency, which they said would help trade. The next day, Stalin cut off all rail and road links to West Berlin - the Berlin Blockade. The west saw this as an attempt to starve Berlin into surrender, so they decided to supply West Berlin by air. The airlift continued until May 1949, when the USSR lifted the blockade. Western forces immediately pulled out of Germany and approved the creation of the Federal Republic of Germany, or West Germany. The USSR responded by creating the German Democratic Republic, or East Germany. The Berlin Blockade lasted 318 days. During this time, 275,000 transported 1.5 million tons of supplies and a plane landed every three minutes at Berlin's Templehof airport. ...read more.

The claims turned out to "be a fraud and a hoax", however he accused anybody who attacked his policies as being a communist and was well known for turning his committee into a weapon to increase his personal power and terrify others. In 1954 he turned his attacks on the army. By this time, his claims seemed ridiculous and he was publicly humiliated by the army lawyer. As a result McCarthy lost all his public credibility and died three years later, in 1957. Truman played a central role in the Cold War. He was at the forefront of conflict often being the person to make the first move thus setting out a pattern in which the Soviet Union would immediately retaliate. Both Stalin and Truman attempted to obstruct each other in any possible way they could. They bombarded each other with propaganda; however each country had shown that they were not keen to get involved with direct conflict. The Berlin blockade was an example of this and set out a tense balance between the superpowers that would dominate much of the Cold War period. In my opinion, both Stalin and Truman were equally responsible for provoking each other into starting the Cold War. ?? ?? ?? ?? Yusuf Sherwani ...read more.