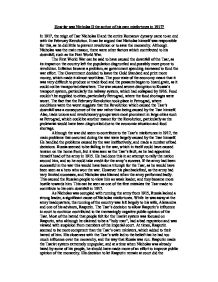 How far was Nicholas II the author of his own misfortunes in 1917? In 1917, the reign of Tsar Nicholas II and the entire Romanov dynasty came to an end with the February Revolution. It can be argued that Nicholas himself was responsible for this, as he did little to prevent revolution or to save the monarchy. Although Nicholas was the main reason, there were other factors which contributed to his downfall, such as the First World War. The First World War can be said to have caused the downfall of the Tsar, as its impact on the country left the population disgruntled and possibly more prone to revolution. Inflation became a problem, as government spending increased to fund the war effort. The Government decided to leave the Gold Standard and print more money, which made it almost worthless. The poor state of the economy meant that it was very difficult to produce or trade food and the peasants began to hoard grain, as it could not be transported elsewhere. The war caused severe disruption to Russia's transport system, particularly the railway system, which had collapsed by 1916. ...read more.

While he was away at the army headquarters, the running of the country was left largely to his wife, Alexandra and one of his advisors, Rasputin. The Tsar's decision to allow Rasputin's influence in court to continue contributed to the increasingly negative public opinion of the Tsar. Most of the hatred that people felt for the Tsarist system was focused on Rasputin, who although he claimed to be a "holy man", had a bad reputation and was viewed with suspicion from members of the imperial court. At times, Rasputin seemed to be more competent than the Tsar's own ministers, which added to their hatred of him. His closeness with the Tsar's wife led to the belief that he had too much influence over the monarchy, and the way that Russia was run. Rasputin made the Tsarist system extremely unpopular, and at a time when Nicholas was already hated by some of his people, he should have made more of an effort to improve public opinion of the monarchy. His decision to let Rasputin remain at court did the complete opposite of this, and the monarchy became even more unpopular and hated than before. ...read more.

It was Nicholas's stubbornness that led him to finally dissolve the Duma in February 1917. The Duma's President, Rodzyanko, recognised that the situation in Petrograd had become serious, and warned the Tsar that the only way to stop a revolution taking place at this stage was to make a major political concession. Once again the Tsar ignored the advice given to him, and instead ordered the Duma to be dissolved. In doing this, the Tsar unwittingly allowed opposition to his position, as twelve members of the Duma formed the "Provisional Committee", which was the first real constitutional opposition of the Tsar, which marked the start of his fall from power. Although there were other factors involved, such as the war, Nicholas II was the author of his own misfortunes in 1917. The ineffective way in which he ruled Russia meant that all the anger of the Russian people, particularly the proletariat, became focused on him, making revolution far more likely to take place. It was his refusal to cooperate with or listen to the Duma that finally caused his downfall, as he was unable to prevent the February Revolution taking place. Words: 1,217oH ...read more.