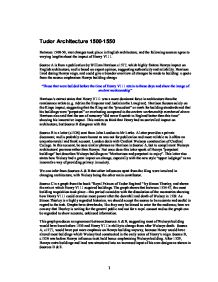 Tudor Architecture 1500-1550 Between 1500-50, vast changes took place in English architecture, and the following sources agree to varying lengths about the impact of Henry V111. Source A is from a publication by William Harrison c1577, which highly flatters Henrys impact on English architecture, and is based on expert opinion, suggesting authenticity and reliability. Harrison lived during Henrys reign, and could give a broader overview of changes he made to building: a quote from the source emphasises Henrys building change "Those that were builded before the time of Henry V111 retain to these days and show the image of ancient workmanship" Harrison's extract states that Henry V111 was a more dominant force in architecture than the renaissance artists (e.g. Adrian the Emperor and Justinian the Lawgiver). Harrison focuses solely on the Kings impact, suggesting that the King set the "precedent" or mark for building standards and that his buildings were "perpetual" or everlasting compared to the ancient workmanship mentioned above. Harrison also said that the use of masonry "did never flourish in England better than this time" showing his innovative impact. ...read more.

Source A, c1577, would have put more emphasis on Henrys building anyway, because Henry would have altered most buildings which Wolsey had constructed in the early years of Henry's reign. Source B, c1526 was before Henrys influence took hold hence emphasising Wolseys building. After 1529, Henrys extra buildings and land was structured into an increased input of his own designs as shown in Sources D & E. Source D provides us with an 18th century engraving, depicting an interpretation of a 16th century building (Henry V111s house at Beaulieu, Essex) where today only the South Entrance and Central Coat of Arms remains. The engraving doesn't show us many significant signs of Henry's changes to Wolseys original building. Also, it is only an interpretation, and we don't know who it was produced by or who it was for, which casts doubt over its reliability. The fact its an 18th century engraving means that the building could have been added to over time, which limiots how much we can learn of Henrys impact, however the accompanying text states the engraving shows " a view of the palace of Beaulieu, commonly called New hall in Essex built by Henry V111", which implies Henry V111 made an impact on the structure. ...read more.

Henry's architectural impact increased since 1529 in the period that Nonsuch Palace was built. Source F puts into words the results shown in Source C, that Henry had a profound effect on architectural changes, as Thurley says Henry was "an active participant in the design of his buildings"" showing he was very innovative e.g. the new lodgings at Greenwich. The Source, like Source E says Henrys changes were mainly based on social changes like the need for privacy. The source says at Hampton Court "privy conceits were devised by his grace". The idea that Henry had an increased impact after 1530 in the other sources is also shown in Source F as Thurley states "Henrys ability, or perhaps inclination to design or influence the design of his residences did not develop until after 1530" and adding that "the king was dominated architecturally by Cardinal Wolsey" before 1530. In conclusion, the sources agree that Henrys involvement changed over time between 1500-50. Wolseys achievements came prior to 1530 (Sources B,C & F). Henrys major impact on architecture came after 1530 (Sources A, C, D, E & F). Overall, we need to acknowledge Wolseys and Henrys power and influence in English architecture 1500-50 to understand the changes that took place, and how the two influences are interlinked. 1 ...read more.