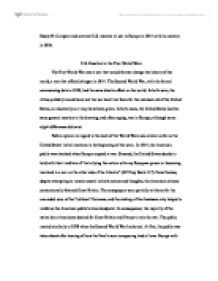 Essay #3: Compare and contrast U.S. reaction to war in Europe in 1914 with its reaction in 1939. U.S. Reaction to the Two World Wars The First World War was a war that would forever change the history of the world, a war that officially began in 1914. The Second World War, with the formal commencing date in 1939, had the same drastic effect on the world. In both wars, the Allies probably would have lost the war had it not been for the eventual aid of the United States, as reluctantly as it may have been given. In both cases, the United States had the same general reaction to the brewing, and often raging, war in Europe, although some slight differences did exist. Public opinion in regard to the each of the World Wars was similar as far as the United States' initial reactions in the beginning of the wars. ...read more.

Roosevelt's belief that Germany was a direct threat to the United States and to future democracies around the world justified his reason to institute a "peacetime" draft. President Wilson and President Roosevelt both realized, when presented with the possibility of being vulnerable to the warring European countries, that the United States' defenses had to be built up. Subsequently, another similarity existed between the United States' reactions to the World Wars. The United States' reactions to war in Europe in 1914 and 1939 followed the same general pattern of events, although not to the minute detail. The public's opinion was largely neutral when the wars began, but eventually morphed to assist and cooperate with Great Britain and France. Even the government's policies changed. They had originally sought to remain neutral, to remain out of the war, yet they were ultimately changed to enter the war in favor of Great Britain. The United States' defense was also altered to include more men, ships, and a draft, actions unheard of when the wars began. ...read more.