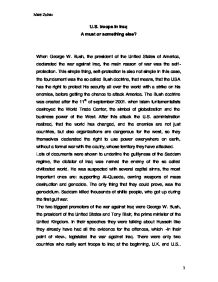 U.S. troops in iraq - A must or something else?

U.S. troops in iraq A must or something else? When George W. Bush, the president of the United States of America, declarated the war against Iraq, the main reason of war was the self-protection. This simple thing, self-protection is also not simple in this case, the foundament was the so called Bush doctrine, that means, that the USA has the right to protect his security all over the world with a strike on his enemies, before getting the chance to attack America. The Bush doctrine was created after the 11th of september 2001. when islam funfamentalists destroyed the World Trade Center, the simbol of globalization and the business power of the West. ...read more.

The two biggest promoters of the war against Iraq were George W. Bush, the president of the United States and Tony Blair, the prime minister of the United Kingdom. In their speeches they were talking about Hussein like they already have had all the evidence for the offences, which -in their point of view-, legislated the war against Iraq. There were only two countries who really sent troops to Iraq at the beginning, U.K. and U.S.. Some other partners of America sent peacekeepers to the region, but those are just symbolic forces to show partnership. We can say that the ex-leader of Iraq is guilty in genocidium, but no evidence has been found yet which proves that Iraq had a bigger arsenal of weapons of mass destruction. ...read more.

forces like bringing them freedom, but they felt somebody was occupying their homeland. It is not unerstandable for them why are american soldiers still there, after the U.S. troops defeated the Saddam regime. The other thing they simply can not take in, is that USA is always talking about reconstructing Iraq, after 13 years of embargo, and after weeks of heavy bombing. The administration has to face the possibility of a second Vietnam, because the national resistance is getting its form in Iraq. U.S. soldiers feel themselves in danger and they can not master the situation. Bush's jurney in Baghdad shows this very well, because he arrived secretly in the dark, stayed one and a half hour and flied home like nothing happened. Now the american soldiers do not even know what they are exactly fighting for. 05.12.2003 M�t� Zolt�n 1 ...read more.