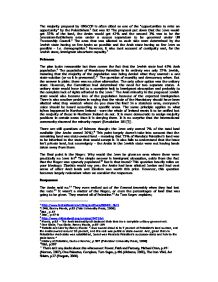 The majority proposal by UNSCOP is often citied as one of the "opportunities to miss an opportunity" by the Palestinians.1 But was it? The proposal put down that the Jews would get 55% of the land, the Arabs would get 42% and the around 3% was to be the Jerusalem-Bethlehem area under a corpus separatum to be governed under UN Trusteeship Council.2 The area that was allotted to each side were determined by the Jewish state having as few Arabs as possible and the Arab state having as few Jews as possible - i.e. demographics.3 However, it also took account of contiguity and, for the Jewish state, immigrant absorbent capacity.4 Fairness The plan looks reasonable but then comes the fact that the Jewish state had 45% Arab population.5 The population of Mandatory Palestine in its entirety was only 37% Jewish, meaning that the majority of the population was being denied what they wanted: a one state solution (or so it is presumed).6 The question of morality and democracy arises. But the answer is plain: there was no other alternative. ...read more.

This question heavily relies on your ideology: Zionists would say yes; the Arabs had been allotted Jordan and had vast areas of other Arab lands and Zionism was worth this price. However, this question becomes largely redundant when we consider the responses. Responses The Arabs said no.11 They even walked out of the General Assembly when they had lost the vote.12 It wasn't a matter of the Negev, or even the percentages of land that was going to be given. They wanted all of Palestine.13 As Tom Segev explains; In any case, still hostage to the rejectionist position they had adopted in 1917, they opposed partition and continued to demand independence in all of Palestine, promising to respect the rights of the Jewish minority.14 The Arab response was wrong, not only because the partition was arguably fair but because they completely flouted the idea of partition - based on any lies. Indeed, this was expected: they had already turned down 80%.15 They had also missed a tactical opportunity to regroup.16 The Jewish response is much more complex. ...read more.