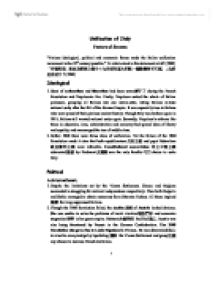 Unification of Italy - Factors of Success.

Unification of Italy Factors of Success "Various ideological, political and economic forces made the Italian unification movement in the 19th century possible." To what extent is this statement valid? (1990) ????????????????????????????????????????(1990) Ideological 1. Ideas of nationalism and liberalism had been sown??? during the French Revolution and Napoleonic Era. Firstly, Napoleon united the whole of Italian peninsula, grouping all Italians into one nation-state, letting Italians re-taste national unity after the fall of the Roman Empire. It was especially true to Italians who were proud of their glorious ancient history. Though Italy was broken again in 1815, Italians still wanted national unity again. Secondly, Napoleon's reforms like those in education, laws, administration and economy had spread ideas of liberty and equality, and encouraged the rise of middle class. 2. Before 1848 there were three ideas of unification. Yet the failure of the 1848 Revolution made it clear that both republicanism???? and papal federalism?????? were infeasible. Constitutional monarchism?????? advocated?? by Piedmont???was the only feasible??choice to unite Italy. Political A. International: 1. Despite the limitations set by the Vienna Settlement, Greece and Belgium succeeded in struggling for national independence respectively. Then both Bulgaria and Serbia managed to obtain autonomy from Ottoman Turkey. All these inspired?? the long-suppressed Italians. 2. Though the 1848 Revolution failed, the decline??of Austria looked obvious. She was unable to solve the problems of racial rivalries???? and economic stagnation?? in her great empire. Metternich??? had fled??. ...read more.

and Two Sicilies????. At last, the German unification movement contributed to the success of the final stage of Risorgimento????. In 1866 Italy allied with Prussia to defeat Austria. Bismarck rewarded Italy with Venetia????. During the Franco-Prussian War of 1870, Italy sent troops to capture?? Rome as the French garrison?? had been called back?? to go home. Thus, France, Britain and Prussia all contributed both direct and indirect help to the success of Italian unification. (Foreign help might not be absolutely reliable??. First, Piedmont had to sacrifice?? Nice and Savoy in exchange?? of the French help to oust?? Austria. It was conditional????. Second, in 1859 Napoleon III suddenly retreated from the Austro-Piedmontese War and signed the Treaty of Villafranca????? with Francis Joseph????.???. Thus, by 1859 Piedmont got Lombardy??? only) B. Domestic: 1. The Vienna Settlement of 1815 had to some extent strengthened?? Piedmont and made her a potential???? leader in the Italian unification movement. To become a buffer state??? against France, Piedmont was given additional population and extra-territories like Sardinia????, Nice, Savoy and Genoa???. The House?? of Savoy was also made the only native?? ruler on the peninsula. By comparison, the Austrian annexation of Lombardy and Venetia, the Austrian cadets?? in the three duchies (Parma??, Modena??? and Tuscany????) and the Bourbon?? rule in the Two Sicilies were unpopular. ...read more.

Yet, the work of Mazzini ought not to be neglected??. He had been able to arouse?? Italians' desire for national unity and independence in his revolutionary career??. Finally, it was Victor Emmanuel II who in 1866 allied?? with Prussia to defeat Austria and recovered Venetia, and in 1870 captured Rome when the French garrison had gone home. He completed the final stage?? of Risorgimento. Economic 1. On the Italian peninsula in 1852-70, only Piedmont was prosperous. In most of the northern Italian states, thanks to?? the Austrian exploitation??, there was heavy taxation. About one-eighth of the national revenue?? of the Austrian Empire derived from the Italian vassals??. Italian industrialists and middle class were annoyed???. 2. In the south, the Kingdom of Two Sicilies suffered from economic stagnation and land shortage??. The Bourbon family imposed?? heavy taxes but failed to make a fair distribution of lands among peasants. There was little relief?? during natural disasters??. In 1860, therefore, many people in the south welcomed Garibaldi's arrival, wishing that he could kick away the Bourbons and re-distribute lands. Sooner or later, they agreed to union?? with Piedmont in the plebiscite in the hope that the prosperity of Piedmont could stretch?? to the south. 3. Under Cavour's reform programme, Britain became the largest trading partner of Piedmont. If Piedmont was able to unite the whole of Italy, the British markets in Italy would be enlarged??. Hence, it explained partly why Britain was happy to aid in the Italian unification movement. END 1 1 ...read more.