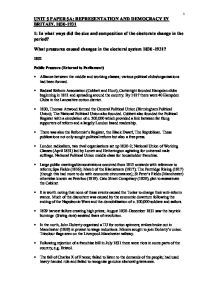 UNIT 5 PAPER 5A: REPRESENTATION AND DEMOCRACY IN BRITAIN, 1830-1931 1: In what ways did the size and composition of the electorate change in the period? What pressures caused changes in the electoral system 1830-1931? 1832 Public Pressure (External to Parliament) * Alliance between the middle and working classes; various political clubs/organisations had been formed. * Radical Reform Association (Cobbett and Hunt), Cartwright founded Hampden clubs beginning in 1811 and spreading around the country. By 1817 there were 40 Hampden Clubs in the Lancashire cotton district. * 1830, Thomas Attwood formed the General Political Union (Birmingham Political Union); The National Political Union also founded. Cobbett also founded the Political Register with a circulation of c. 200,000 which provided a link between far flung supporters of reform and a largely London based readership. * There was also the Reformist's Register, the Black Dwarf, The Republican. These publications not only sought political reform but also a free press. * London radicalism, two rival organisations set up 1830-2; National Union of Working Classes (April 1831) led by Lovett and Hetherington agitating for universal male suffrage. National Political Union middle class for householder franchise. * Large public meetings/demonstrations occurred from 1815 onwards with reference to reform; Spa Fields (1816); March of the Blanketeers (1817); The Pentridge Rising (1817) [though this had more to do with economic circumstance]; St Peter's Fields (Manchester) otherwise known as Peterloo (1819). Cato Street Conspiracy (1820), plot to assassinate the Cabinet * It is worth noting that none of these events caused the Tories to change their anti-reform stance. Much of the discontent was caused by the economic downturn following the ending of the Napoleonic Wars and the demobilisation of c. 300,000 soldiers and sailors. * 1829 harvest failure creating high prices; August 1830-December 1831 saw the hayrick burnings (Swing riots) assisted fears of revolution. * In the north, John Doherty organised a TU for cotton spinners; strikes broke out in Manchester (1830) ...read more.

Towns divided by class lines - managed to win seats in Lib heartlands of the industrialised areas. (NB see party organization for effects on political parties). * North was much stronger electorally. 'The redistribution of 1885 marked a major watershed in the development of the British electoral system. It involved largely sweeping away the traditional pattern in which constituencies had covered very large geographical areas and in which most counties and boroughs had returned two, three, or even four members. All boroughs with a population below 15,000 lost their seat; and new seats were allocated for units of population over 50,000. This involved the division of most counties and many boroughs...this meant creating socially homogeneous communities.' Pugh. What it didn't change * No new principles * No manhood suffrage (2/5th -2/3rd of adult male population had vote. * Only c.95 of constituencies were working class by 1900. * By 1914 Britain still possessed one of the most restricted franchises in western Europe. * Size of constituencies still not uniform. Largest difference was 8x bigger than smallest (had been 250x) 1918 What did it change? * Gave all men over 21 (with 6 months residential qualification) the vote (increase from 60% to 95%). Increased male voters from 8m - 13m (no property qualification at all). * All women over the age of 30 (householders) about 8.4m voters. I.e. wives and mothers, but no munitionettes and no 'flappers'. * Plural votes limited to a maximum of two (for residence and business premises or residence and university residence). * Major redistribution of seats and re-drew the electoral map of GB. * Creation of uniform, single member constituencies of c. 70,000 inhabitants * Elections made cheaper - expenses of the returning officer to be paid from public funds. * Same day voting * Largest ever increase in the electorate (about 250% increase), total vote c.21.4m. * 1919: First woman MP Nancy Astor for Plymouth (Husband's seat) ...read more.

The failure of revolutionary factors In other European countries such as France and Russia, economic circumstance had acted as a catalyst to radical reform and revolution. Not so in Britain. Whilst it is true that poor economic conditions in the 1820s, 1860s and in the first ten years or so of the twentieth century had all helped to create an atmosphere that induced concessions from the political parties, nevertheless the leaders of reform failed to press home their advantage. Furthermore, the working class didn't necessarily identify franchise reform with an improvement in their living and working conditions. Instead, their priority was immediate social and welfare reform, which they believed could be achieved from within the current system. Indeed in 1868 the TUC specifically rejected the idea of a working class party but formed the Parliamentary Committee whose objective was to put pressure on both the Conservative and Liberal Parties. They did wring out a number of concessions particularly between 1868 and 1880 and it was not until the Tory dominated 1890's that the Trade Unions finally recognised that significant gain could only be made through the formation, and accession to power, of the Labour Party. The history of Britain's progress towards democracy is one of a stout, effective rear-guard action by the ruling elite. Concessions made at the right time, the inverted snobbery of both the middle class and the upper tier of the working class ensured that politics continued to be dominated in 1900 by the men of a similar background to those who had ruled in 1800. Whilst economic depressions undoubtedly created pressure for reform throughout this period, nevertheless it was easy for the old order to divorce the leaders of the movements for democracy from the bulk of their supporters by limited concessions. The idea of political revolution as a method of securing better conditions didn't seriously gain support in Britain. Syndicalism and communism, prevalent on the continent at the turn of the century, gained few supporters in Britain. Britain's natural conservatism ensured that the pace of change would be sedate. ?? ?? ?? ?? 1 ...read more.