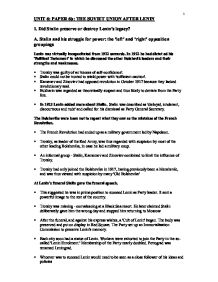 UNIT 6: PAPER 6b: THE SOVIET UNION AFTER LENIN

UNIT 6: PAPER 6b: THE SOVIET UNION AFTER LENIN 1. Did Stalin preserve or destroy Lenin's legacy? A. Stalin and his struggle for power: the 'left' and 'right' opposition groupings Lenin was virtually incapacitated from 1922 onwards. In 1922 he had dictated his 'Political Testament' in which he discussed the other Bolshevik leaders and their strengths and weaknesses. * Trotsky was guilty of an 'excess of self-confidence'. * Stalin could not be trusted to wield power with 'sufficient caution'. * Kamenev and Zinoviev had opposed revolution in October 1917 because they lacked revolutionary zeal. * Bukharin was regarded as theoretically suspect and thus likely to deviate from the Party line. * In 1923 Lenin added more about Stalin. Stalin was described as 'disloyal, intolerant, discourteous and rude' and called for his dismissal as Party General Secretary. The Bolsheviks were keen not to repeat what they saw as the mistakes of the French Revolution. * The French Revolution had ended up as a military government led by Napoleon. * Trotsky, as leader of the Red Army, was thus regarded with suspicion by most of the other leading Bolsheviks, in case he led a military coup. * An informal group - Stalin, Kamemev and Zinoviev combined to limit the influence of Trotsky. * Trotsky had only joined the Bolsheviks in 1917, having previously been a Menshevik, and was thus viewed with suspicion by many 'Old Bolsheviks' At Lenin's funeral Stalin gave the funeral speech. * This suggested he was in prime position to succeed Lenin as Party leader. It sent a powerful image to the rest of the country. * Trotsky was missing - convalescing at a Black Sea resort. He later claimed Stalin deliberately gave him the wrong day and stopped him returning to Moscow * After the funeral, and against his express wishes, a 'Cult of Lenin' began. The body was preserved and put on display in Red Square. ...read more.

They would always remain selfish and put their own interests first, so the Communist Party needed to bring them into line. * If the policy of Collectivisation was agreed, it would further undermine some of the opposition to Stalin in the Party - Bukharin, for example was an advocate of slow growth, in effect a continuation of the NEP. The process of collectivisation * In the winter of 1927-28 the peasants did not deliver enough food for the cities. Food Requisitioning was used by the Party to make up the shortfall. This brought the issue of agriculture to the fore. * It had been hoped that collectivisation could occur voluntarily, but this was not working. Party members were sent to the countryside to help with the harvest. * Poor peasants were encouraged to denounce hoarding, and rewarded with 25% of any grain discovered. * After the harvest of 1929 there was a great campaign to collectivise. Peasants were supposed to vote on collectivisation, but in most cases it was forced through by party officials. * Between November 1929 and March 1930 60% of all farms were collectivised. Opponents were labelled Kulaks and were transported to the Gulags or arrested and shot. * Each area was given a target of Kulak families to arrest and deport, again an almost arbitrary terror descended on the villages. * There was huge opposition from the peasants, especially when the Churches were ransacked or turned into barns or meeting places, and personal property was confiscated too in some areas. * Warehouses were often broken open and personal goods restored to their owners. Faced with such widespread opposition the Party had to back down. * Stalin made a speech in early 1930 ('dizzy with success') accusing local party officials of being over-zealous and allowing peasants to leave the collective farms. Many did. * Once the 1930 harvest had been safely collected collectivisation began again. ...read more.

* Marxism was, after all the future for all mankind. Lenin set up the strong centralised Party to impose its will on the working class. He tolerated no opposition outside the Party, but did tolerate discussion, debate and dissension within the Party. He even forgave mistakes or errors in thought. * There was a distrust of elections, a feeling that the people needed to be led for their own good. Terror was justified; fulfilling the policy was important, not questioning it. The only way forward was a one-party state, involving terror and elimination of opponents if that was necessary. All these ideas were carried forward into Stalin's time. Discontinuities: * Stalin had no real wish to see the 'withering away' of the State, he regarded the development of a strong state as an end in itself. He, perhaps to hide his own insecurities or initial lack of support, found it necessary to elevate the idea of leader as someone above the Party. * Lenin could be, and often was, outvoted or kept in check by the 'Old Bolsheviks'. Stalin was a dictator much more than Lenin, who would not tolerate opposition, or potential opposition either within or outside the Party. * Lenin dominated the Party by force of personality, Stalin by brute force. His state made much greater use of terror to secure support. His own distrust of individuals led to frequent changes of personnel. Conclusion: * Without Lenin there could have been no Stalin. * Lenin set up a system that allowed Stalin (a) to become leader and (b) develop that system into what we call Stalinism. It wasn't inevitable that Stalin should follow Lenin, or indeed that Stalin's regime should develop the way it did. * The best way to think of Stalin, as he sometimes did himself, is as a Tsar - Peter the Great or Ivan the Terrible. He was a strong leader doing what was necessary to make Russia, rather than the Soviet Union, strong and able to maintain its true place in the world, as a Superpower. ?? ?? ?? ?? 5 1 ...read more.