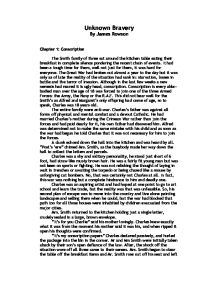 Unknown Bravery By James Rowson Chapter 1: Conscription The Smith family of three sat around the kitchen table eating their breakfast in complete silence pondering the recent chain of events. It had been a tough time for them, well not just for them, it was hard for everyone. The Great War had broken out almost a year to the day but it was only as of late the reality of the situation had sank in: starvation, losses in battle and the terror of invasion. Although in the last few weeks a new nemesis had reared it is ugly head, conscription. Conscription is every able-bodied man over the age of 18 was forced to join one of the three Armed Forces: the Army, the Navy or the R.A.F. This did not bear well for the Smith's as Alfred and Margaret's only offspring had come of age, so to speak, Charles was 18 years old. The entire family were anti-war. Charles's father was against all forms off physical and mental combat and a devout Catholic. He had married Charles's mother during the Crimean War rather than join the forces and had paid dearly for it, his own father had disowned him. Alfred was determined not to make the same mistake with his child and as soon as the war had begun he told Charles that it was not necessary for him to join the forces. A clunk echoed down the hall into the kitchen and was heard by all. "Post's 'ere" chimed Mrs. Smith, as the busybody made her way down the hall to collect the letters and parcels. Charles was a shy and solitary personality, he stood just short of 6 foot, had straw like musty brown hair. He was a fairly fit young man but was not keen on sports or fighting. He was not relishing the thought of laying in wait in trenches or awaiting the torpedo or being chased like a mouse by unforgiving cat bombers. ...read more.

One unremarkable but bitterly cold and ferociously blustery day the dread news made its way to 4th Platoon Prince Of Wales via a telegram. Yawning, Sergeant O'Neill tore the paper from the output tray, wiping the sleep from his eyes with the back of his hand and read slowly, to make sure his mind took in all the information, the entire letter. Exasperated, Sergeant dropped the paper to the floor and galloped his way down the hall to his quarters working the horrible news through his tired mind over and over making for certain he had not made some grievous misjudgement for if he had not his entire platoon's mood would take a huge and grave turn. At 0600 hours the entire platoon was lined up as per usual outside the mess hall awaiting the days tasks. Sergeant O'Neill paced up down the row looking up occasionally to give a menacing glare to private with a button undone or his collar out of place. All was as it should be, or so it seemed. "I received a telegram this morning as I awoke" heralded Sergeant O' Neill brightly. "Although not the usual cheery type I get from time to time." He continued. "No this particular bliter was rather an unhappy one." He stated with emphasis upon "unhappy". "This one was from the Home Minister's office," he said without the bright tone but with a more grave tone. "We will be travelling to the Somme at 1800 hours exactly; you will have today to yourselves as this may be your last day as a freeman in a long time." With that he marched back straight and shoulders square to his quarters and shut the door. A stony and painful silence gripped the company. They were in disbelief. Stunned. Shocked and terrified. After what seemed like an ice age they men split and made their separate ways to their billets most not to reappear until the sun had sank below the skyline. ...read more.

They became entangled, impaled and ensnared into the thick, steel ropes struggling like a hostage bound to a wall. They fidgeted trying to free themselves but this only made their predicament worse and with their final gasp of breath they let out blood-curdling scream before collapsing motionless, never to reawaken. Charles powered on through the minefields miraculously avoiding the mines with clever footwork but mostly sheer luck. Charles glanced momentarily behind him to witness one of his friends be sent soaring into the air and ripped to pieces and flump like a ten tonne weight to the ground. He quickly wiped this from his mind and turned around and looked directly forward. He was within thirty feet or so of the Nazi frontline. Erratically, Charles pulled his machine gun from his holster and seemingly fearlessly brandished his weapon getting focus upon an unaware opponent. Pulling back the trigger he let out a reel of three bullets directly at the chest cavity of the German. The bullets connected sending the man crashing down to the ground, most definitely dead. Guilt flooded over Charles in the form of a clammy cold sweat and his unwanted partner returned, fear. Charles couldn't bring himself to move. He stock still, an easy target for any alerted sniper. Sergeant O'Neill caught the sight of Charles out of the corner of his eye and screamed and him, "Retreat!" Charles still didn't move. He couldn't. Sergeant O' Neill took matters into his own hands he flew across the ground focused directly upon Charles, still stationery. He leapt full body facing the enemy in front of Charles taking two straight shots to the chest. He had no chance. He slammed to the floor and the impact stunned Charles into retreat. Turning his back on his Sergeant completely unaware of his act of bravery and sped back towards his trench. He dived head long to safety and curled up automatically and whimpered like baby crying for its mother. Is this what war is about? Is this what is called honouring your country? Don't we ever learn? ...read more.