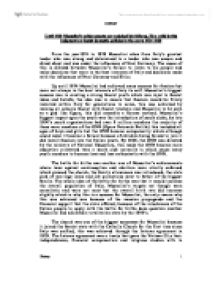 Until 1939 Mussolini's achievements out weighed his failures. How valid is this judgment on fascist domestic policies in the years 1924-1939.

Until 1939 Mussolini's achievements out weighed his failures. How valid is this judgment on fascist domestic policies in the years 1924-1939 From the year1924 to 1939 Mussolini when from Italy's greatest leader who was strong and determined to a leader who was unsure and dived about and was under the influences of Nazi Germany. The cause of this is divided between Mussolini's failure to listen to his people and make decisions that were in the best interests of Italy and decisions made with the influences of Nazi Germany and Hitler. Up until 1936 Mussolini had achieved many success for fascism but were not always in the best interests of Italy its self. Mussolini's biggest success was in creating a strong fascist youth which was loyal to fascist ideas and beliefs, the idea was to ensure that fascism would be firmly installed within Italy for generations to come, this was achieved by making all schools fascist with fascist teachers and Mussolini to be seen as a god like figure, this did resemble a Roman method. ...read more.

The Lateran agreement was a treaty that gave the Vatican City their independences, financial compensation and religious studies with in schools to be made compulsorily. The reason why the Lateran agreement was such a success was because at the time the relations between the church and the fascist state were very sourer and Mussolini finally accepted the church with in the fascist state. The church later regretted the agreement because of Mussolini's foreign policies and the relations that he had with Hitler. The significances the Lateran agreement in the end gave Mussolini the maneuverability to expand his empire and to not have to worry about domestic problems. The OND (Opera Nazionale Dopolavoro) was Mussolini's answer to getting his people more involved in fascism and the idea was to provide the Italian people with free leisure and entertainment, this was controlled by a government agency which was set up in 1925. The fascist party organized the entertainment and by 1939 there were 4 million members, which was not as successful as the ONB but was also not compulsorily where the ONB was. ...read more.

Mussolini also decided to change the youth body to "the Italian youth of the Lictors" (GIL) this was to ensure the increased military and physical training for the youth, the idea was to turn the youth organizations in factories producing loyal fascist solders who saw Mussolini as their god. Mussolini's policy on anti-Semitism in 1939, which he had introduced because of Hitler, caused many catholic and the church to go against Mussolini and with the majority of Italians catholic this was a very bad move for Mussolini. Anti-Semitism had never been featured with the fascist regime before and caused many Italians especially the youth and students to have growing cynicism of the regime. Before 1936 when the Italian government had not differed into unpopular forign policies, adventures and commitments the Italian people had tolerated Mussolini and the decisions that he took but after 1936 when Mussolini started to interfear with dometic policies and unessaseliry change policies it started to inoy the Italian people and the church which caused the down fall of Mussolini's popularity amoung the church and the party. 07/05/07 History 1 ...read more.