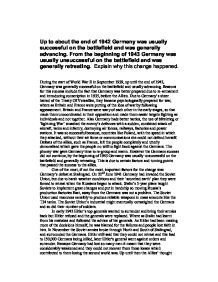 Up to about the end of 1942 Germany was usually successful on the battlefield and was generally advancing. From the beginning of 1943 Germany was usually unsuccessful on the battlefield and was generally retreating. Explain why this change happened. During the start of World War II in September 1939, up until the end of 1942, Germany was generally successful on the battlefield and usually advancing. Reasons for this success include the fact that Germany was better prepared due to re-armament and introducing conscription in 1935, before the Allies. Due to Germany's sheer hatred of the Treaty Of Versailles, they became psychologically prepared for war, where as Britain and France were putting of the idea of war by following appeasement. Britain and France were wary of each other in the early stages, so that made them uncoordinated in their opposition and made them easier targets fighting as individuals and not together. Also Germany hade better tactics, the use of blitzkrieg or 'lightning War' smashed the enemy's defences with a sudden, combined attack of aircraft, tanks and infantry, destroying air forces, railways, factories and power stations. It was so successful because, countries like Poland, with the speed in which they attacked, without their air force or communications she could not defend herself. Defeats of the allies, such as France, left the people completely and utterly demoralised which gave the people no will to fight back against the Germans. ...read more.

In the beginning the Allied victories such as Dunkirk, gave the British people a huge morale boost as they survived to fight another day. The Battle of Britain and then the Battle of the Atlantic gave the allies control of the air and the sea, which made the reinvasion of Europe possible. The Battle of El Alamein was significant to the Allies, as the Germans there forth did not have control of Suez Canal and consequently the oil. The Allies now were able to invade through Sicily. One of the long-term factors that lead to the change and eventually Germany's defeat was Hitler's mistakes. These include that he kept control of the war in his own hands; the success of invading France via the Ardennes made him over confident. There was an inefficient weapon supply, with Germany producing a wide range over weapons such as, 425 types of aircraft, compared to the Allies' mass production of a small range. Hitler failed to follow through, he could have defeated Britain twice; during the Battle of Britain and Dunkirk. He made rash decisions that had been successful at the beginning of the war due to lucky circumstance. Yet one of the most major mistakes Hitler made was to declare was on the USA after Japan bombed Pearl Harbour in 1941. On 7th December 1941 the USA joined the war effort. ...read more.

The Germans bombed the British ports and cities in 1943; they only dropped 2,320 tones of bombs on Britain. Overall this slowed down the German industrial production rate, weakening them further. All the factors, whether long or short term played a part in the change from Germany's advancing and the success on the battlefield to their downfall from 1943 onwards. However, some factors are undoubtedly more important or significant that others. It is questionable whether the Soviet Union and the war effort of the USA are as equally important. This is because when looking at the invasion of the Soviet Union, millions of Germans had dies, 200,000 had been taken prisoner at Stalingrad alone. The Soviet Union was too big, the weather was appalling and Hitler had taken on a country that industrially overtook him in time. The USA may just come a very close second, due to its economic might, she recruited millions of men and since her entrance into the war it was just a matter of time until the Allies won. Yet saying that, if those two factors stood alone they may have not defeated Germany. The others, not such major factors but nether the less important, such as the resistance groups that helped to 'weaken' Germany so the defeat would come quickly. As Napoleon's political life ended at Waterloo, but the decisive turning point was his defeat at Moscow. Hitler was soon treading Napoleon's road, and it is the Battle of Stalingrad that sealed his doom. ...read more.