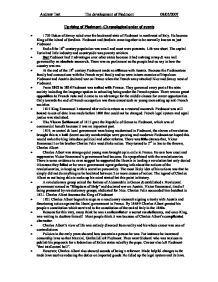 Uprising of Piedmont- Chronological order of events * 1720 Dukes of Savoy ruled over the backward state of Piedmont in northwest of Italy. He became King of the island of Sardinia. Piedmont and Sardinia came together to be normally known as just Piedmont * End of the 18th century population was small and most were peasants. Life was short. The capital Turin had little industry and countryside was poverty stricken. * But Piedmont had 2 advantages over other states because it had a strong army & was well governed by an absolute monarch. There was no parliament so the people had no say in how the country was ran. * At the end of the 18th century Piedmont made an alliance with Austria. Because the Piedmontese family had connections with the French royal family and so were in turn enemies of Napoleon. Piedmont and Austria declared war on France when the French army attacked Nice and Savoy west of Piedmont. * From 1802 to 1814 Piedmont was united with France. They governed every part of the state society including the language spoken to schooling being under the French system. There was no great opposition to French rule and it came to an advantage for the middle classes for career opportunities. ...read more.

* Reasons for this vary, many think he was a nationalist or a secret revolutionary, and once King, was waiting to declare himself. Most people think it was because of Charles Albert's complicated character. * Charles Albert's view of life was entirely divorced from reality and his whole career was one of contradictions * Policies in the early years showed how uncertain a person he was. For instance he increased censorship laws so that Mazzini, Garibalidi left Piedmont. Then went Gioberti who was anxious to publish his proposals for a federation of Italian states ruled by the pope. Cavour also left Piedmont: "that intellectual hell". * However, Charles Albert also showed sounds of being a reformer. Made helpful changes to the trade laws such as reducing the duties on imported goods. He tidied up the legal system and its laws. * During the 1840s influences from other parts of Italy prejudiced Piedmont. 1841, social, non-political were allowed to meet freely for the 1st time. It was important because it recognised these groups existed and put forward an idea of a more relaxed regime. * Piedmont hosted a lot of scientific congresses which spread a lot of nationalist ideas such as in 1846 Charles Albert was referred to as "the Italian leader who would driver out the foreigners". ...read more.

This allowed the Piedmontese army to withdraw Lombardy leaving it in Austrian hands again. * In 1849 having regrouped his forces and being persuaded incorrect by his chief minister that Luis Napoleon newly elected president of the French Republic that he would come to his aid if Piedmont again attacked Austria. Charles Albert re-entered the war with no success. He was heavily defeated by the Austrians at Novara in April. * His idea of "Italy will make herself by herself" became wrong and there was no way Italy could be independent or united without outside help. * Charles Albert was succeeded by his son Victor Emmanuel II seen as defying Austrian plans for the Statuto's abolition. Most historians now believe he was not anxious to keep it but was pressured by the Austrians to keep it instead. Austrians believed anything besides a republic was tolerable. * The constitution remained in force and gave opportunity for an active political life in Piedmont something which did not exist anywhere else in Italy. * It had reasonably free press, an elected if unrepresentative assembly, and a certain amount of civil liberty and legal equality. * Piedmont attracted refugees from the rest of Italy during the next decade, which was to be dominated by the political leadership of the now returned Cavour, the military successes of Garibaldi and the interventions of Napoleon III of France. ?? ?? ?? ?? Andrew Tait The development of Piedmont 08/05/2007 ...read more.