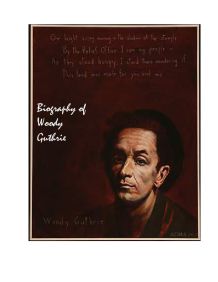 Woody Guthrie was just 42 when he entered the hospital for the last time in 1954. His period of true creativity had spanned no more than eight or nine years, though in that time, he had traveled far, seen wonders and known defeats, and written as many as 1,400 songs. He had traveled Route 66, he boasted, enough to run it up to 6,666, back and forth, across the county as urges and winds took him. Woody was one of the greatest influences on Bob Dylan. During his brief time as a college student, Bob Dylan became interested in traditional and American folk music. After reading Woody Guthrie's autobiography, called Bound for Glory, Bob's music was heavily influenced by Guthrie's. In January 1961, he moved to New York City, to perform there and to visit his sick musical idol Woody Guthrie, who was dying in a New Jersey hospital. Guthrie had been a revelation to Dylan and was the biggest influence on his early performances. Dylan would later say of Guthrie's work, "You could listen to his songs and actually learn how to live." In the hospital room bob took out his guitar and started singing to him. Dylan met Woody's old road-buddy Ramblin' Jack Elliott, who was visiting Guthrie the day after returning from his own trip to Europe. Dylan and Elliott became friends, and much of Guthrie's work was actually channeled through Elliott. "So long Woody it's been good to know you. Your songs and your spirit have resurrected in people the sense of freedom, of liberty and of power". In the fall of 1952, doctors at Brooklyn State Hospital definitely diagnosed Woody as having the same condition as his mother--Huntington's Chorea, a hereditary degenerative disease that affects the nervous system and eventually results in death. At the time, he did not fully accept this diagnosis and would check himself in and out of the hospital to wander New York as he had for over a decade. ...read more.

This caused some debate in the family since Jack was listed as the composer, and yet Woody said the song was actually his. A sensible picture of that situation was Woody wrote an early version, but Jack reworked the song, adding new lyrics, and so making the final song a combined piece of music. In the end, a quite friendly agreement was made and both Woody and Jack were given credit. But for the time being Jack and Woody were just one of a number of small-time cowboy singing groups in Los Angeles. They made what they could by singing in bars. They performed country-western tunes around town and promoted themselves on radio station called KFVD. Later, Jack dropped out of show business for a time and Woody started singing with Maxine Crissman, with whom he dubbed "Lefty Lou." This pairing was so successful that he was able to bring Mary and their children to Los Angeles in 1937. Woody dropped the cowboy songs that Jack preferred and stuck mostly to traditional folk tunes. He also begin to sing some of his own songs. Many of the songs Woody and Lefty Lou performed were old-style tunes such as "A Picture from Life's Other Side" and "Boll Weevil." But Woody also began composing some of his original songs and compositions in their shows like: "Talking Dustbowl Blues" and " If You Ain't Got The Do Re Mi" which explored and exposed the harsh reality of the California as well as reflecting the politicization of the time. Although the rumors of California being a land of absolute opportunity that had brought a rush of agricultural laborers from everywhere in the 1930s, the reality was rather different. The great farms that stretched across California's rich valleys did need workers and pickers, but so many positions were available that wages were put downward. The pickers lived in their cars, tents, or shacks they built out of whatever materials they could find. ...read more.

They moved back to California and to New York where they had a daughter. Woody continued to write, and in the summer of 1954 traveled the country one last time. Then in September of 1954, he checked himself back into Brooklyn State Hospital. Woody was mostly in and occasionally out of various hospitals for the rest of his life. Anneke left Woody in 1956, but he had other visitors including Marjorie, friends from the folk music world, and a great population of fans. During 1950s-1966, Marjorie Guthrie, family and friends continued to visit and care for him. In the mean time new styles of music were developing and new artists were replacing the old ones. To visit Woody were Joan Baez, Bob Dylan, Phil Ochs, and many other young folksingers who brought their guitars and their songs to play for him, and perhaps even to thank him. Woody Guthrie died on October 3, 1967 while he was at Creedmoor State Hospital in Queens, New York. "His ashes were sprinkled into the waters off of Coney Island's shore." A month later, on Thanksgiving 1967, Arlo Guthrie released his first recording called "Alice's Restaurant", which was to become an anti-war anthem for the next generation. During his life, Woody Guthrie wrote nearly 3,000 song lyrics, published two novels, created artworks, authored and unauthored manuscripts etc. We willl never forget you Woody. "Woody is just Woody. Thousands of people do not know he has any other name. He is just a voice and a guitar. He sings the songs of a people and I suspect that he is, in a way, that people. Harsh voiced and nasal, his guitar hanging like a tire iron on a rusty rim, there is nothing sweet about Woody, and there is nothing sweet about the songs he sings. But there is something more important for those who still listen. There is the will of a people to endure and fight against oppression. I think we call this the American spirit. ...read more.